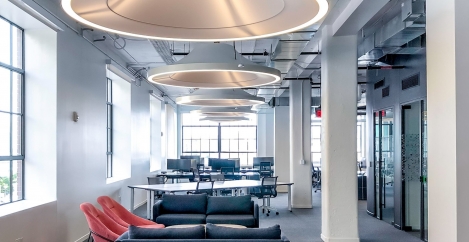 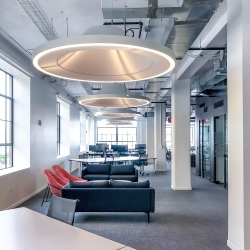 BDG architecture + design and FUTURE Designs will display the only AERO313 luminaire in the country, at Borough Yards, London Bridge, as part of this year’s London Design Festival which runs from 17-25 September 2022.  FUTURE Designs was appointed by BDG architecture + design in 2020 to create this innovative custom light fixture that is a centrepiece of the latest WPP campus project in Detroit, USA. Faced with transatlantic logistics and regulations, the sheer scale of the product, as well as a global pandemic, the team involved tackled unprecedented challenges in order to deliver this ground-breaking luminaire to practical completion for a client on time and to budget.

The success is largely due to the determination and collaborative attitude of all involved in this project and this is the key theme of the accompanying exhibition at Borough Yards: The Power of Partnerships.

The journey from initial sketch by BDG to a fully functional office light manufactured by FUTURE Designs took place during the early stages of the pandemic, with the first full prototype made in May 2020. The AERO313 was required to be approved by the USA’s stringent UL Standards body, which meant the luminaire had to be shipped to its laboratory in Italy in order to receive full approval, all of which happened during a Covid lockdown. The full production of 89 luminaires commenced one month later and the initial shipment dispatched to WPP’s landmark project Detroit in October 2020.

Consistent with WPP’s global programme, the location is an adaptive re-use of the historic Marquette building in downtown Detroit. Built in 1905, it was originally the site of the Murphy Power Company and the Murphy Storage and Ice Company, a few blocks from the river and in the middle of Detroit’s financial district.

FUTURE Designs manufactured bespoke wooden crates that are reusable, negating the need for pallets, card or shrink wrap packaging to minimise waste and weight. The luminaires were craned into the windows of the Marquette Building in Detroit. Its three point install with pre-wired power lead, allowed the installers to position the AERO313 without removing the luminaire from the crate until suspended. This saved time in the installation process and minimised the risk of damage to the luminaires.

The enormous luminaire, measuring 2235mm in diameter and 550mm deep, had to incorporate a number of practical requirements such as sprinklers, speakers and smoke detectors. AERO313 is fabricated in laser cut aluminium, its sections fit together to form a seamless circle of LED, wrapped in a stretch ceiling acoustic shroud. This light is a creative, non-traditional way to approach the ceiling and acoustics budget of a commercial project such as the groundbreaking WPP Detroit campus. The design of AERO313 is reminiscent of a 1955 Ford Thunderbird steering wheel and is also a reference to the fact that Ford is a long-standing client of WPP’s. The circular design is also a nod to a stereo speaker, referencing Detroit’s musical heritage from Motown in the 1960s to the birthplace of techno in the 1980s.

David Clements, FUTURE Designs’ Chief Executive says: “This project had many challenges, not least in terms of its size, scale and shipping to the United States during a global pandemic. This is what makes the stunning result even more satisfying and rewarding. Working with BDG, we have created a truly unique luminaire which meets exacting technical standards, enhancing this landmark workspace design.”

The AERO313 luminaire is a ground-breaking feat of modern design. BDG and FUTURE Designs have embodied the power of partnership, proving that collaboration is not only the increasingly effective tool of the future, but a way to provide consumers with a fresh aesthetic and functional perspective whilst nurturing a close friendship between two businesses.

The next chapter in the AERO313 story takes place nearly 4000 miles away from Detroit in London this September. Borough Yards, a new mixed-use district adjacent to the historic Borough Market in London Bridge, provides the perfect environment for BDG and FUTURE Designs to jointly exhibit the Aero 313, with the last remaining luminaire in the U.K. on display from 17-25 September during the London Design Festival 2022 (by appointment only, contact zoe@informare.co.uk)