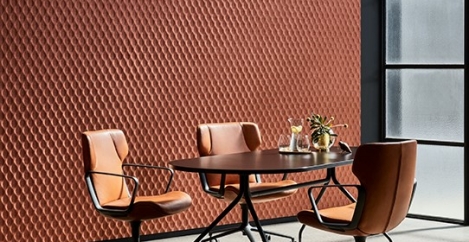 A new dimension from Woven Image 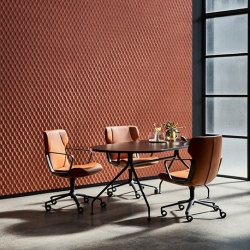 Woven Image brings a renewed sense of connectivity to the workplace with its new collection, Dimensional Connections. By combining three-dimensional textures with the soothing tones of ochre and cinnamon a renewed positive energy is brought into the workplace, whether that be in a home office or in a collaborative corporate environment. Dimensional Connections incorporates Gem the newest addition to the embossed panel series.

Gem is the third design in a growing collection of tactile wall panels, following on from Woven Images recent launches of Zen and Ion. Embracing the trend towards more tactile surfaces and three-dimensional textures, the panels interweave cutting-edge design with sustainability and commercial performance. The design of Gem is reminiscent of expanded mesh or netting, off set diamond like shapes create a lattice impression across the panel.

Complementing the simplicity of Zen and the complexity of Ion, Gem is the subtle mid-scale design of the trio.
Gem is available in 9 different colourways from subtle neutral tones of frost, vanilla and pebble to the popular mid-tone shades of duck egg blue and peachy blush. Introduced for 2020 are the on trend shades of ochre and cinnamon, which are now colour options for Zen and Ion as well as the Mura wallcovering palette.

Reducing reverberated noise in shared spaces, these acoustic panels are ideal for floor-to-ceiling applications, and pattern match for continuous wall and double-height installations.