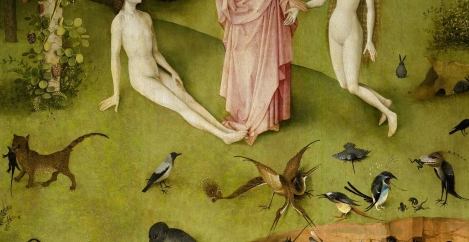 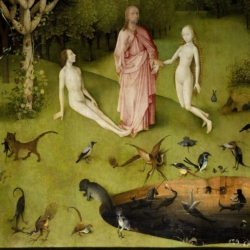 An adherence to strongly held beliefs can make people think and behave in peculiar ways and get them tangled up in all sorts of peripheral issues that suddenly take on a great deal of significance. Early religious artists, for example, spent centuries wrestling with the intractable problem of whether to depict Adam and Eve with belly buttons or not. It’s a question that troubles theologians to this day but at least they can talk about it in metaphysical terms whereas artists have to choose whether to openly suggest that Adam and Eve were born rather than created, hiding the belly button completely or just going along with whatever and letting other people do the arguing. Many classical artists chose the latter although some chose to use a fig leaf to obscure both the genitalia and implied origins of their subjects.

The theological flimflam surrounding this subject reached its apogee in 1857 with a book called Omphalos by a naturalist called Philip Gosse which suggested that Adam and Eve both had navels, and that this was just part of an elaborate plan by God to make the world look older than it really was. This mischievous God, according to Gosse, also went around burying fossils deep underground, knowing that one day they might be found and give us humans the idea that the Earth was very old indeed. Gosse knew what he was doing in naming the book Omphalos, which is the Greek for navel, and while this may seem like a pretty clear example of cognitive dissonance in action, the belief in a young Earth made to look old by a trickster God still has adherents.

We might feel sniffy or mocking about this kind of thinking but we all do it to a greater or lesser degree. Many of us do it on a daily basis, not least in imbuing what we do for a living with great importance. While we shouldn’t get too tangled up in what we do to the extent it precludes everything else and threatens our wellbeing and mental health, neither should we reject the idea of the nobility and relevance of our chosen line of work. There is a balance to be struck and if nothing else, a job feeds, shelters and cares for us and our families, structures our time and identity and centres us in our communities.

Facing up to inconvenient truths

There is a tendency to blame the lack of external recognition as a problem of the profession not finding its voice, which seems in the past to have been about volume more than content

Professions often seem prone to their own version of navel gazing, including when faced with inconvenient truths. I once took part in a feature for facilities management website i-fm.net which asked a number of editors of facilities trade journals and other commentators for their views on the state of the facilities management profession. Elliott Chase of i-fm.net was clear that the results should be published anonymously for the reason that it gave people the licence to tell the truth (or their idea of it), not least about the place of FM in the world. The views were not necessarily what you would read in the trade journals involved and they are certainly not what you would hear from the sector’s major players and trade associations in public. Anonymity offered the freedom to speak truth to power.

Gareth Tancred, then the Chief Executive of the then BIFM responded to the feature based on what I would consider to be the main fallacy underlying the mission of many professional trade associations and their representatives.  ‘There is a real desire to see FM get the credit and recognition it deserves’, he wrote at the very beginning of his response before elaborating on the notion that the reason other people don’t see why FM is so important is because the profession is not getting the message across. ‘We want to provide the industry with a voice,’ he writes. ‘we want to provide the proof points and narrative that we can take to the broader community of both business professionals and policy makers about the valuable contribution that FM makes; and we want to celebrate the impact that it has on business, the economy and wider society.’

But maybe that isn’t the problem at all, or at least not all of it. Maybe the message is getting across but other people see things differently or aren’t interested in it. It’s a topical issue as the BIFM continues to adjust to its transformation into the IWFM. It remains interesting to observe this. I recently bemoaned the tendency to blame the lack of external recognition as a problem of the profession not finding its voice, which seems in the past to have been about volume more than content.

FM (or WFM perhaps) is not alone in thinking that it doesn’t shout loudly enough so that people outside the room can hear too. Architects for example routinely come out with the same stuff, but then undermine their own arguments by speaking only to each other and in impenetrable jargon, before blaming Muggles for not understanding them and looking down on them for holding opinions they aren’t qualified to hold.

Well just maybe the Muggles do get it about buildings and even if they don’t, might still have a right to an opinion. Maybe it is simply that architects, facilities managers, human resources managers and other workplace professionals inhabit an appropriate evolutionary niche regardless of what they themselves might think of as a profession. And no amount of navel gazing is going to change the fact.

Image: A detail from the Garden of Earthly Delights by Hieronymus Bosch

The new wellbeing movement: Anna Davison in conversation Stress, sickie days and a beamish response to it all