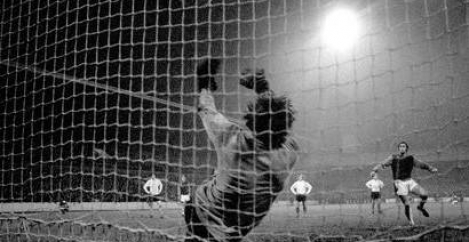 The facilities manager`s fear of the penalty kick 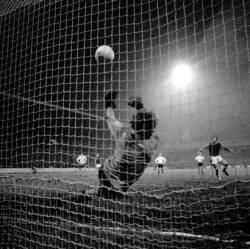 On the whole, football is not a great source of inspiration for artists. It certainly doesn’t film well, although there is a small place for it in literature. The likes of Arnold Bennett, Orwell, Sartre and J B Priestley have all drawn from the game some metaphor, philosophical point, social observation or other. There are even some major literary figures who played the game to a decent level, and the curious thing about them is that they were all goalkeepers.

Sir Arthur Conan Doyle turned out between the sticks for the original Portsmouth FC. Albert Camus was a two-time winner of the North African Cup, and the North African Champions cup with his side Racing Universitaire d’Algers, and may even have been capped by Algeria, although records are vague. Vladimir Nabokov played in goal for his university in St Petersburg and later at Trinity College, Cambridge.

I’m not making any of this up.

There’s some reason for this and it might be that the role of goalkeeper is unique and so attracts singular people. Nabokov described it romantically as ‘the lone eagle, the man of mystery, the last defender’ in his memoir Speak, Memory. Describing the games in which he plays, he sees himself paradoxically as part of the team, yet alone. The Austrian novelist Peter Handke’s book The Goalie’s Fear of the Penalty Kick, takes the outsider status and existential struggle of the goalkeeper to extremes, including murder.

As well as goalkeeping, another profession prone to existential struggles is facilities management, and for many of the same reasons

This struggle is what makes goalkeeping an attractive position for the kind of  person who accepts or is drawn to the idea of spending a lot of the game observing. They must maintain high levels of focus to be ready when the time comes, but are otherwise unable to shape the game outside their immediate zone of influence. Mistakes are magnified and, even when a goalkeeper plays well, it is likely to go unremarked unless doing something genuinely spectacular, which only happens now and then. Other players are allowed to make mistakes, but not the goalie. Others are allowed to roam the pitch, but not the goalie.

It is perhaps the most human position in the game. As Camus himself wrote: “Everything I know about morality and the obligations of men, I owe to football”.

Another profession prone to these existential struggles is facilities management, and for many of the same reasons. The facilities manager too is most obvious when missing or making a mistake. He or she is less creatively involved most of the time. It is often easy to underestimate or ignore the contributions that facilities managers make to the organisation and the lives of the people who work for it. He or she can feel this inherent unfairness very keenly and must make sense of it.

The problem with the facilities management voice

There have always been plenty of calls for the FM sector to find its ‘voice’, including – God help us – the creation of yet another trade body more focussed on ‘workplace’ – a plea that has for the time being been somewhat knocked back by the BIFM’s name change and other disciplines parking their own tanks on the workplace lawn.

Still, the idea that what the message needs is more volume is often expressed at conferences and in the media. It is a notion usually built around numbers, in turn based on the premise that everything in the world must be maintained and managed. Once you accept this premise and link it to the amorphous role of facilities managers and their related sectors, you can make up whatever number you like for the value of the sector. Then you pronounce the number you’ve thought up, like Dr Evil coming up with a ransom figure, but in reality, who knows?

Not that it matters. Nobody outside of the sector seems to have been much moved by this kind of pronouncement in the last thirty years so it’s hard to see why they will be now. Shouting louder and adding noughts won’t work. And we can’t process big numbers very easily. It looks like desperation.

However, it is true that the facilities management sector is at something of a crossroads. In large part, this is down to the changing nature of the workplace which now encompasses both digital and cultural domains almost as much as the physical office. This is the driving force behind the now IWFM’s name change.

As I’ve highlighted before, there are those within the sector who think that FM already encompasses these things and so the name change and shift in focus is misguided because they are innate. There are others – and I’m one of them – who think this gets things exactly the wrong way around and that FM is an (important) element in something much bigger.

This is the essence of existentialism. Life is a struggle and governed by a set of rules that are largely outside the control of the player, who is left merely with choices about how to respond to them. The greatest challenge of a particular roles within the context of this game is how to respond to its uniqueness and apparent unfairness. The solution is either to come to terms with it all, or to adopt a new position and run with the ball.

The future of work has no destination, there is only the journey Commercial tenants will be protected from eviction if they cannot pay rent