Availability of commercial property in London lowest for six years 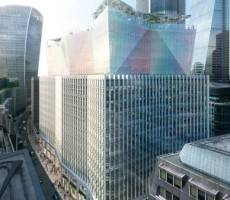 According to a report from CoStar News, prepared by CBRE, the availability of commercial property in Central London continued a long term fall during April to 13.76m sq ft, the lowest level since June 2008. This caused the availability of offices in central London to fall to 6.2 per cent, significantly below the 10-year average of 7.6 per cent, the agent said. Demand remains strong according to the report with the volume of office space under offer in central London up by over 65 per cent since the end of last year to reach the highest level for 13 and a half years. Under offers are currently at 4.73m sq ft, their highest point since September 2000, when under offers stood at an all-time high of 5.92m sq ft. The report claims that there are a total of seven buildings across central London with more than 100,000 sq ft currently under offer, including 10 Fenchurch Avenue (above). More information here.