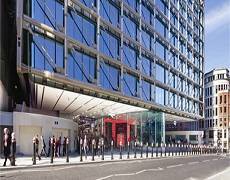 The CBI is to move its headquarters to new offices in Cannon Street, London, after more than 30 years at its present Centre Point home, which is to be converted into apartments. Staff at the UK’s leading business organisation will make the switch from the multi floor office layouts of the 1960s built tower to an open plan 25,000 sq ft space when they move into the fourth floor of the eight-floored Cannon Place development in the spring. The CBI director-general, John Cridland, said he was looking forward to the move to the new offices, on which the organisation has signed a 15-year lease and invited its members to make use of a dedicated member’s lounge at the new London HQ to meet their clients and CBI staff.

In an interview with the Independent Cridland said that the organisation’s 240,000 members should view the new premises as: “your office, make use of it. That wasn’t possible in Centre Point,” he said.

As well as the “members’ lounge”, the new offices will include a rolling exhibition that will showcase the “Best of British”.

And CBI staff will for the first time operate in an open-plan environment – a move that, Cridland said, would create a more creative atmosphere. He added that the open-plan principle was “part of the mentality where we are all mucking in together,” saying: “I will have the same chair and desk as everybody else.

“The challenge of generating ideas to revive the British economy demands real creativity. That comes from being inclusive, not being shut away in executive suites.”

“Centre Point has been the CBI’s home for over 30 years so the decision on new location has been hugely important to us,” he said.

“We are delighted to have found Cannon Place – it is a great building in a prime location with easy access to transport links for our members and our staff.

“Next spring really will be a time of renewal as we mark the beginning of an exciting new chapter in the CBI’s history.”

Mark Swetman, director at international real estate firm Hines, which developed Cannon Place, said:  “Attracting the UK’s most prominent business organisation is a real coup, and we’re thrilled to welcome the CBI to Cannon Place. It is a premium building, which we always knew would attract premium tenants.

“We are particularly pleased by the speed at which we were able to close the deal, and we look forward to the CBI arriving at the building next Spring.”

Last year Hines completed a 140,000 sq ft letting to law firm CMS Cameron McKenna at Cannon Place, which was developed in partnership with Network Rail and London Underground. The scheme incorporating the re-development of the two previous office buildings and the renovation of Cannon Street station, one of London’s busiest transport hubs which serves 27 million passengers a year.

Fifth of undervalued and disengaged staff plan to move jobs this year Rise in employee wellbeing initiatives in 2014, despite little evidence they work