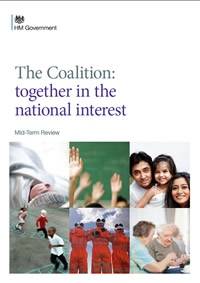 The government may have reiterated its commitment to the green agenda in its Mid Term Review, which was published this week, but green groups remain resolutely unimpressed by its overall environmental record. Summarising the Coalition’s green initiatives so far, including the trebling of support for low carbon energy up to 2020 and the encouragement of green investments through the Green Investment Bank, the review stated: “We promised to be the greenest government ever, and we will fulfil that commitment.”

The report then added: “We understand that in touch economic time, when families are struggling to make ends meet, the environment can seem like a second order issue, and we are determined to meet our environmental commitments at the lowest possible cost to British families and businesses.”
The green lobby remained unimpressed by the government’s green performance so far.
Keith Allott, Chief Climate Change Adviser at WWF-UK, said: “The coalition’s mid-term programme states once again that climate change is one of the gravest threats we face, and that this will be the ‘greenest government ever’.”
“But the document offers no new policies for renewable energy or energy efficiency at home, and no commitments to leadership on climate change in Europe and internationally. Instead, it offers tax breaks for the fossil fuel industry.”

He added: “David Cameron said today that the coalition still has “a full tank of gas.” Unfortunately, it appears determined to burn it rather than embracing the full opportunities of a greener future based on renewable energy.”
Friends of the Earth’s Executive Director Andy Atkins said: “Blue and yellow hasn’t produced green. David Cameron’s pledge to lead the “greenest Government ever” is being systematically undermined by short-sighted policies, not least its reckless dash for gas.”
It added that the Chancellor”s restrictions on the ability of the Green Investment Bank to borrow from the capital markets until national debt is falling as a percentage of GDP – means that the Bank, “A body that should be the engine of our economic recovery remains subjected to the Chancellor’s austerity drive – a massive missed opportunity.”