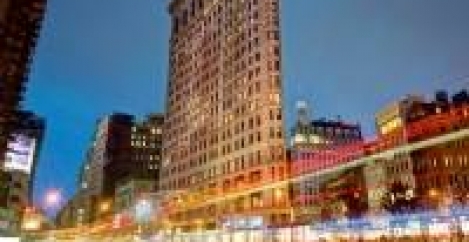 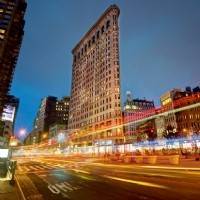 The commercial property markets in the world’s major cities are evolving against a backdrop of ongoing economic and political uncertainty, according to the new 12 Cities Report from Savills. The authors suggest that the main consequence of this since 2008 has been for investors to switch their focus from paper assets to property. This in turn has led to a number of developments in local commercial property markets including global investors looking for alternatives to the major cities within key national economies. One of the key developments is that major tech firms are now willing to spend as much on their real estate as the previously dominant financial giants. One other interesting issue raised in the report is the growing inability of people to afford to live and work in the same place, especially in cities with restrictions on the amount of space available for development.

The report suggests that the working inhabitants of the world’s largest cities are now the victims of their success in attracting visitors and investors in large numbers. This is especially true in historic and physically constrained cities like London where there is more likely to be upward pressure on rents which are outstripping people’s ability to afford them.  In turn, the report expresses concern that this may restrict economic growth in the future. 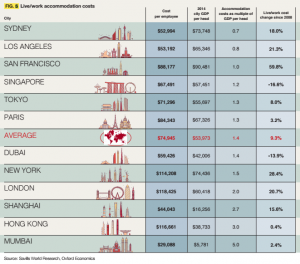 The biggest rent rises have taken place in cities where supply is at its scarcest. According to this, a good example is San Francisco, where live/work costs have risen by nearly 60 percent since 2008. Demand has been driven by businesses that want to be based in the top, high-performing, creative digital city, alongside households preferring urban living to suburban sprawl. High live/work rental growth has also been seen in New York, Los Angeles, London and Sydney which have all seen rents spike between 18 percent and 28 percent since 2008. Meanwhile, cities with more availability, such as Singapore and Dubai, have seen rents fall, so live/work accommodation rents in these cities are now 14 percent to 17 percent lower than they were in 2008.

The report also shows how the rise of the digital economy in urban settings is changing their geographies and property markets. The locations favoured by occupiers within cities are changing and new, small cities are increasing in importance to compete with the global giants.

As a consequence, the report suggests that the gap between rents paid worldwide by tech and other creative businesses is closing with those paid by the finance sector. The firm finds that average shifts in the world city rents monitored indicates overall financial rents have fallen by -1.8 percent whilst creative sector rents have risen by 8.6 percent.  Digital and creative companies now pay $10,453 per annum per staff member or 47 percent of an average hedge fund’s rent ($22,399) up from 42 percent in 2008.

Savills data, taken across the 12 cities during the time period December 2008 and June 2015, shows the creative and digital office rents in Hong Kong, San Francisco and London have risen by 46 percent, 43 percent and 30 percent respectively.  San Francisco saw digital and creative sector rents rise by 430 basis points (bps) compared to 80 bps in the financial arena, this compares to Hong Kong where digital and creative outperformance contributed to a 460 bps rise in commercial rents compared to 190 bps in the financial sector.

In Sydney, Savills says, creative rents have overtaken the financial sector, standing, on average 7 percent higher.  Meanwhile in Dubai, finance sector rents have fallen by as much as 60 percent since 2008 and are 41 percent less in Singapore when compared to 2008.

Yolande Barnes, director of Savills world research, says: “The digital discount has eroded since 2008 as the industry continues to act as a disrupter due to its rapid rate of expansion.  In cities where there is lower demand from financial tenants such as Sydney, average rents are already higher for the digital sector, while they are very similar in Dubai and not substantially discounted in Paris.  In other locations, such as London and New York, traditional corporate financial centres such as Wall Street and the City of London are now priced lower than Midtown and Mayfair, where new creative and digital specialists in the finance sector have emerged, in themselves different to the old traditional corporate finance sector.”