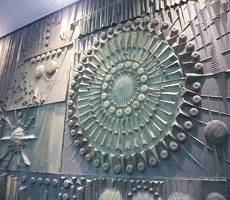 The results of a pilot project to review list descriptions for post-war commercial offices has been announced by English Heritage. The revisions to 28 commercial offices by the conservation body have better identified the special interest in these buildings, which in many cases are the exterior and internally are usually limited to spaces such as lobbies and board rooms. When other parts of the building, such as basements and working floors are not of interest, this is said explicitly, thereby giving owners greater flexibility and clarity in the consents process and the management of change.

The project was carried out in response to the recommendations of the Penfold Review, most of which have been incorporated under the new Enterprise and Regulatory Act, which aims to streamline the heritage protection system with clearer, faster and more efficient decisions.

Emily Gee, Head of Designation at English Heritage, explained: “This project has helped shape our designation response to the government’s better regulation agenda and provided what we hope are useful improvements for the owners of these special working offices. English Heritage is committed to applying appropriate levels of protection and providing clarity, while also celebrating the very best of post-war commercial architecture.”

As part of the project, the Time and Life Building (1953), London [pictured], has been upgraded to Grade II* in recognition of the high level of design and high quality art, including two commissions by Henry Moore, Ben Nicholson reliefs and Geoffrey Clarke sculpture integrated into the building. The interiors of the building were designed by Sir Hugh Casson, director of architecture at the Festival of Britain.

Another building covered by the project is Bracken House (1955, London), the former headquarters of the Financial Times, which was the first post-war building to be listed in 1987. This late example of modern classicism has since undergone significant change since listing, as the central printing house was rebuilt in 1988-91 for the new owners by Michael Hopkins and Partners. It was cleverly knitted into the wider building and is of such quality that it has been given a special mention within the Grade II* listing.

Liz Peace, Chief Executive of the British Property Federation which was consulted on the project, said: “The passage of the Enterprise and Regulatory Reform Act will bring many benefits for all those involved with listed buildings as for the first time the extent of the listing will be legally defined.

“This will make it much easier to identify and protect those parts of a listed building which make it special whilst, where appropriate, allowing changes to take place to less significant parts of the building that may be needed to keep it in use and so safeguard its future.

“The problem is that most listed buildings currently have listings which provide only the sketchiest information about what makes them special. Updating those listings will be a massive job and we are delighted with the success of English Heritage’s initial pilot to provide more detailed listings for modern office buildings. We look forward to working with English Heritage to build on this solid start and explore which other buildings should be fast tracked for more detailed listing.”

Will the Great Trade Association Merger have any impact on office design? Long term investment in infrastructure needed to boost UK economy