We may not always feel it, but technology makes us far more productive 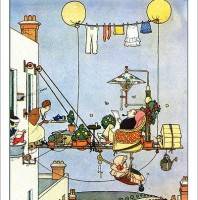 A new report has been published by O2 which suggests that technology has allowed us to become nearly five time more productive than we were in the 1970s. The Individual Productivity Report is a joint research project from O2 and the Centre for Economic and Business Research and used a metric called gross value added (GVA) per worker per hour to arrive at its results. The report concludes from this data that in terms of ICT the average British worker is now 480 percent more productive than they were in the 1972, that people get more done in less time, freeing them up to spend more time interacting with clients and colleagues, providing better service and driving business growth.

As ever, we need to put the results of such research into context. Doing more of something doesn’t necessarily mean you are doing the right things or going about them in the right way. The technology itself is creating tasks that didn’t even exist during the report’s baseline 1970s era. And, as we know, some of the technology can make us less productive and less effective in specific ways.

There might also be a feeling amongst workers that they are less productive than they once were, given the difficult or impossible task of trying to keep up with the information and tools that are available to us. The report claims that doing more might actually lead us to feel like we are doing less. The report reflects the exponential fall in the cost of information over the last three or four decades. In 1980, it claims that a gigabyte of hard disk space cost £120,000 at current prices. Today the cost of a gigabyte is approximately 5p, a fall of 2.4 million percent.

The journey between the productivity of the 1970s and that of today has even endured a couple of blips. ICT related productivity actually fell in the mid 1980s in the midst of an economic downturn but just before the common adoption of the technologies that have done most to transform working practices. Microsoft Windows didn’t come along until 1990, the dial up Internet in 1992 and Google in 1998.

The report takes the bold step of predicting what will happen between now and the customary cut-off point for predictions 2020. It predicts that ICT related productivity will go up by another 22 percent over the next seven years, compared to an increase of 15 percent in overall productivity.

No doubt this will be driven by the next wave of technological change coupled with their interrelated socio-economic and commercial developments. The now near universal application of flexible working practices that is evident in the latest YouGov survey of new ways of working in the UK shows just how pervasive this link between productivity and technology has become.

The implications cut across every aspect of our society and the way we run business and will form one of the most important strands of the discussions at Worktech London which takes place during November.

Philip Ross is a consultant and commentator on the impact of technology on our lives, work and workplaces. He is also the driving force behind the global Worktech series of events. Worktech London takes place on the 19th and 20th November. More information is available here.