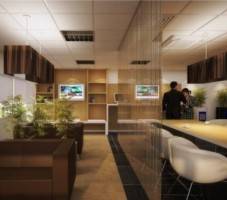 The Building Research Establishment (BRE) has launched the latest addition to its flagship sustainability accreditation scheme. Launched fully at MIPIM UK, the Building Research Establishment Environmental Assessment Method (BREEAM) Refurbishment and Fit-Out 2014 standard has been in development for around  two years, a period which has included consultations with some of the UK’s largest commercial property occupiers, end users as well as a full assessment of a pilot project at BRE’s base near Watford. It joins existing BREEAM standards as a way of assessing the sustainability of office refurbishment and fit-out projects in the UK and overseas. The standards were tested on a simulated refurbishment project at the BRE site and achieved, in the words of the organisation,  “significant savings as well as many other positive learning outcomes”. Firms which took part in the two year development and consultation period included Lloyds, Boots, Legal & General and The Green Investment Bank.

Projects are now able to register for the accreditation from 31 October 2014, with support from the BREEAM Projects website. The scheme’s technical manual and a range of supporting documents will also be available from the BREEAM website.

BRE claims that the scheme’s flexibility is derived from a new four-part modular approach, giving a range of certification options. Part one deals with the building fabric and structure. Part two is concerned with core services (e.g. centralised M&E plant). Part three deals with local services and part four with interior design.

Refurbishment and fit-out projects can be assessed against one or all of the four parts, or any combination, depending on which are relevant to a particular project. The scheme also introduces assessment criteria that have been adapted for refurbishments and fit-outs to reflect the split between tenant and landlord responsibilities and the limitations and opportunities for improving existing buildings.

The accreditation aims to set new performance benchmarks that reward improvements to the worst-performing buildings, while also giving recognition for buildings that already perform well. There are also a number of new criteria aimed at making existing buildings fit for the future such as issues focusing on climate change resilience and functional adaptability.

Projects assessed under the scheme can receive a BREEAM rating from pass to outstanding. The certificate will indicate the parts that have been assessed, providing comparable performance across the property market and between competitors.