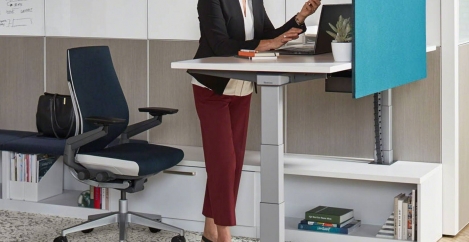 New study claims to confirm the benefits of sit-stand workstations 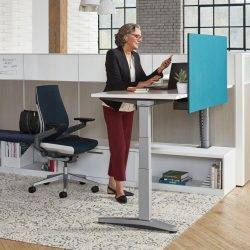 A new study suggests that height adjustable or sit-stand workstations may be beneficial in reducing sedentary behaviour and supporting health outside the workplace. The study’s results have been published in the International Journal of Workplace Health Management. Funded by the American Society of Interior Designers (ASID) Foundation’s Transform grant, interim study results were announced on the ASID website last year. The final study, “Stand Up to Work: Assessing the Health Impacts of Adjustable Workstations,” found that sit-stand workstations are linked to increased productivity, better mental concentration, and improved overall health in employees who used sit-stand desks over a 12-month period. Most employees reported that the sit-stand desks had a positive impact on their health outside the workplace.

“What makes this study different from any other sit-stand desk study—which is also what made it worthy of peer review and publication—is the combination of its long duration and its inclusion of complementary qualitative data,” says lead researcher Dr. Elizabeth Garland, associate professor at the Icahn School of Medicine at Mount Sinai. “Most studies conclude after just a few months. Ours lasted a full year. This allowed us to assess both the objective and subjective health impacts of sit-stand desk usage, from perceived stress and well-being to measurable changes in sedentary behaviour.”

An evaluation of sedentary behaviour

Garland collaborated with a multidisciplinary team of researchers from the Center for Active Design (CfAD), architecture and design firm Perkins+Will, and furniture manufacturer Steelcase to carry out the study. Perkins+Will and Steelcase are both committed to advancing healthy buildings and products as Advisory Board members and Champions of Fitwel, a healthy building certification operated by CfAD.

The team evaluated sedentary behaviour changes in office workers who received adjustable workstations that allowed them to shift between standing and sitting, and compared their behaviour to that of workers with traditional desks. Half of the participants—randomly selected from one floor of Perkins+Will’s Atlanta studio—received Steelcase height adjustable workstations, while participants on other floors maintained traditional desks. Polling measured sedentary behaviour, and participants reported perceived stress and ongoing behavioural changes before installation and at three months, six months, and 12 months after installation. Both qualitative and quantitative data were collected and analysed.

The published study can be downloaded here. An executive summary, including a review of the methodology and implications derived from the research, is available here.