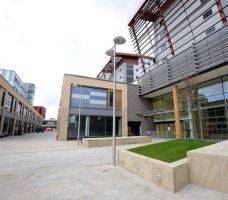 Building Design magazine has announced this year’s winners of its annual Carbuncle Cup competition, which aims to name and shame the UK’s ‘unforgivably bad’ buildings. As well as identifying problems with specific buildings, the judges also raised concerns about the catalysts for poor buildings, especially overdevelopment. The judges this year included Owen Luder, former president of the Royal Institute of British Architects, and Prince Charles’s architectural adviser, Hank Dittmar. While the main prize went to Tesco’s ‘inept, lumpen, arrogant and oppressive’ new supermarket in Woolwich in South East London, and the runners up prize went to the 50 storey residential Vauxhall Tower at St George’s Wharf, the most nominated building following the call for entries earlier this year was the Walkie Talkie skyscraper in London. However this office building was deemed ineligible because it is yet to complete. It now looks a shoe-in for next year’s prize however.

The most nominated building this year was the mixed use Trinity Square development by 3D Reid (above), which replaced the Brutalist car park famously featured in the 1971 Michael Caine film Get Carter. Building Design editor Thomas Lane Lane and the team of judges believe the development typifies one of the most common themes now associated with bad building design which is the desire by developers to force through the biggest buildings they can get away with on sites in order to maximise their returns.

“Good architecture should provide decent places for people to live and work, enhance our towns and cities, be enduring and ultimately uplift the spirit of everyone who interacts with those buildings,” Lane wrote. “The sad reality is that far too much new development falls short of these basic tenets of good design. Significant amounts of time and money is spent on new development and good design should be a given, not an afterthought. The result is great swathes of Britain’s towns and cities are mediocre, uninspiring with no real identity.”