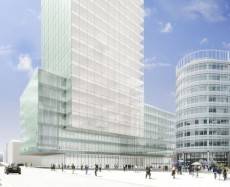 Developers have submitted plans for the development of a new tower on the site of an existing office building in Manchester city centre. Allied London is looking to create a new 19 storey office in Spinningfields, the city’s troubled £1.5 billion business district which ran into development problems at the height of the recession between 2007 and 2010. The new building a will offer over 340,000 sq. ft. of office space and is designed by Ian Simpson Architects who were responsible for the design of the Beetham Tower. The ground floor is also likely to incorporate retail outlets, cafes and restaurants. A final decision on the application from the local authority is due in April. Quay House, the current building on the site, is argued by the developer to be under-occupied and outdated.

Michael Ingall, chief executive of Allied London said: “No 1 Spinningfields will be the district’s most imposing building to date and one of Manchester’s most stand-out office buildings. Our last significant building, 3 Hardman Square, won several awards for its design and specification and we expect this building to take the mantle of the best regional office building in the UK. We have taken inspiration from buildings around the world and aim to deliver highly desirable office space combined with the city’s highest restaurant. There are many features of this building that reflect the new economy and occupiers’ demand for more flexibility, but most importantly, the building has been designed to fit into the environment.”

He added: “We have worked hard with Ian and his team to ensure that Hardman Square can exist as a permanent, significant public realm space. ‘The Lawns’ area was destined for future development as part of the original masterplan but the area has become an overwhelming success, much loved by the public. It is now integral to Spinningfields and will be maintained and enhanced, continuing as a special focal point for all kinds of activities.”