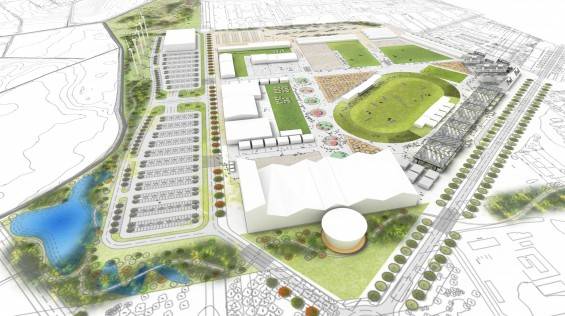 The notorious Maze Long Kesh prison site in Northern Ireland where the ‘H’ block hunger strikes took place is to be redeveloped into an international standard showground designed by London-based firm Studio Egret West.
The Royal Ulster Agricultural Society (RUAS) was granted planning permission to relocate the Balmoral Show, (Ireland’s largest Agricultural and Food Show) to the site of the former Maze prison, after the Balmoral show outgrew the Kings Hall site where it has been held for 100 years.
Studio Egret West design puts the new showgrounds at the heart of the site – where over the next 10 years the RUAS aspires to develop a world class centre for agricultural excellence in Northern Ireland including, new exhibition halls, a one-planet-living centre, International equestrian centre, agri-business village and an ecology park with hotel and conference faculties.
This week NI Environment minister Alex Attwood formally gave the green light to the Studio Egret West designed planning application, which will enable the Balmoral Show to take place in its new location in May this year.
Minister Attwood said: “I have given very careful consideration to this proposal, interrogating all of the issues.”
“The proposed relocation by the RUAS is seen as a catalyst for further redevelopment on the Maze/Long Kesh site, which has been identified as a site of Strategic Importance.”
The Royal Ulster Agricultural Society said it was delighted to receive confirmation from the minister.
Commenting on the decision, Colin McDonald, RUAS Chief Executive said: “This is another step to a continued positive future for the RUAS. The fact that planning permission has been fast-tracked shows us that there is a great deal of support for our strategic plans.”