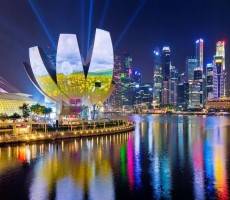 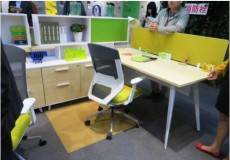 CIFF Office was just as overwhelmingly crowded, frantic and idiosyncratic as ever. There were enough office furniture related products to satiate the most enthusiastic devotee. How can there be so many office furniture companies? More than nine hundred exhibitors, of which very few were from outside China. None from outside Asia. And how can so many visitors – again almost all from China – be quite so interested in office furniture? They certainly seemed to be. There were of course some visitors from overseas; this year, most of the non-Chinese seemed to be from India. The show spans 34 halls, some of them vast, on a site which covers more than 100 acres. The distances required to traverse the site are so great that there are permanently long lines for the shuttle service of dozens of electric buggies transporting visitors from one area to another. 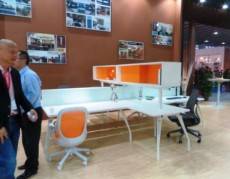 The halls are organised by product sector, very much in the way shops in China are grouped, with all the food, jewellery, camera, bridal and shoe shops in separate clusters. Here at the show, all the office seating for example is gathered in nine vast halls, all on its own, as if customers for seating are expected to be uninterested in any other type of office design.

If you never saw another mesh chair, it wouldn’t be too soon. There were some attractive, well designed products – but you needed to kiss a lot of frogs before you found them. Many of the larger stands were well designed and attractive and used colour and graphic themes creatively. Furniture was often well spaced to allow it to catch the attention and to cater for the massive crowds on some popular stands, especially at the beginning of the week. The halls and general areas were patrolled by many different groups of officials and assistants. Security guards, SWAT crews, information providers, cleaners – and semi-military types holding up signs telling visitors what they could and couldn’t do.

All the usual facilities were present, even if language barriers sometimes made them difficult to find. Restaurant and refreshment facilities challenged non-Asian palates and most of the Westerners I saw gravitated to MacDonald’s rather than brave, the mainly unidentifiable, Chinese dishes.

Walking the halls hardened the heart. Every stand, and most of the aisles, were packed with crowds of incredibly keen, identically dressed young salespeople who indefatigably launched themselves at anyone within shouting distance in order to obtain their “name card” or to try to elicit even more useful information. Westerners were especially juicy targets. Glancing at a stand was enough encouragement to cause several salespeople to pounce. 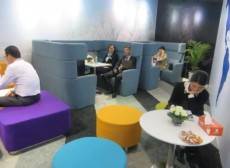 At every step, you were reminded of just how commercially-minded and competitive China is. No one seems to have any idea of the size of the office furniture market in China nor of the relative scale of the largest manufacturers. Several claimed to be the largest but didn’t know who their closest competitors were. One told me they had 5000 employees and 20 factories!

The creativity and innovation which seemed to be blossoming at last year’s show was sadly less in evidence this year. Maybe all the talk of lower levels of growth had put a brake on some of the investment in design and development. As in previous years, some Chinese manufacturers had employed western designers, especially from Italy and the Netherlands, and the results attracted even bigger crowds to those stands. Western products were on display on some stands, both officially, where companies such as Sunon were showing genuine Humanscale chairs, and more often unofficially, with the usual raft of blatant copies of products from companies such as Vitra, Okamura and Interstuhl. 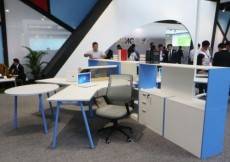 There was less breakout furniture on show than in previous years but there were plenty of examples of other western trends, such as wood-effect legs and felt upholstery on seating and screens. Other western-styled products harked back to earlier days with L-shaped work stations, spines and large executive desks. Often, the only distinguishing features were the different styling of legs, end-frames and finishes.

Almost all Chinese manufacturers are still at the stage where the inspiration for new product design relies more on emulating international styles and features, rather than creating products based on the study and understanding of the nature of office work and how it is changing. Sunon, one of the most prominent manufacturers, who are headquartered in Hangzhou, had a large, well-positioned stand which was constantly full. Their exports to 70 countries make up 20% 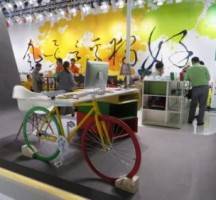 of their sales. The entertainment on their stand included girls in tutus playing electric violins while dancing and two impossibly tall models in 8” heels welcoming their guests. BBMG Tintan from Beijing with 2,000 employees showed some typical workstations. More unusual was the elegantly dressed lady on their stand creating pictures in sand on a light box.

FGW Jin Gang Wan showed an eye-catching task chair while one of the larger local companies, Rainbow, from HongQiao who presented a wide variety of products had an unusual black leather and stainless steel executive range, MT-32. Wosen Office’s 1,800 employees are based in Zhongshan City and are another manufacturer with a wide range of products including veneered and mfc workstations, seating and sofas. They showed some breakout furniture and enclosures on part of their large stand. 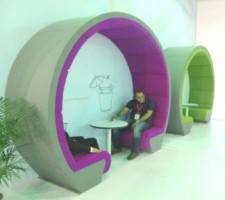 Renchao Furniture who employ 400 in Dongshen Town showed their new range of appropriately named ‘Ocean Blue’ workstation furniture. The massive Jongtay Group from Zhongshan City, founded in 1983, is made up of three divisions including the Paiger brand. Their Italian-designer created stand was one of the most imaginative at the show with a liberal use of bicycles supporting workstations. Another very large company, Quama who are actually based in Guangzhou, showed an attractive workstation range, Gelin, which featured brightly coloured felt screens with elasticated organising straps and electrically height-adjustable tables. They also presented a large circular enclosure, again upholstered with the ubiquitous felt.

Office Essential from Hong Kong showed HAD, an innovative app controlled electrically height adjustable table which attracted plenty of attention. Ofun took bright colours to an extreme with everything in orange and white, including their salesmen’s outfits. One of the stars of last year’s show, Guangzhou Lightspace, was a bold joint venture between a Chinese manufacturer and a Dutch designer. This year, their products stretched boundaries even further and in some ways looked as though they come from another planet, when viewed alongside the standard Chinese fare. 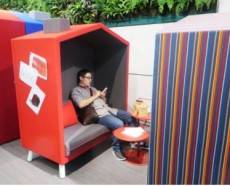 Finally, the transition of this show from being strictly of the Chinese, for the Chinese, is still work in progress. Despite its vast proportions and the tens of thousands of visitors attesting to its undoubted regional importance, the organisers need to do much more to encourage exhibitors from outside the region if they really want it to become a truly international exhibition. The serious business of walking the aisles and corridors and absorbing the styles, designs, atmosphere and hustle and bustle was, as always, lightened by taking in some of the signs on display. 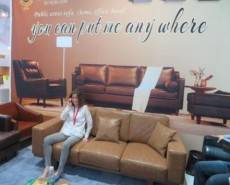