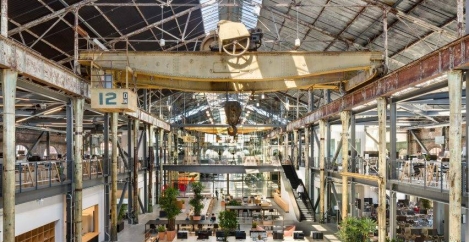 The scale of the problem for the workplace 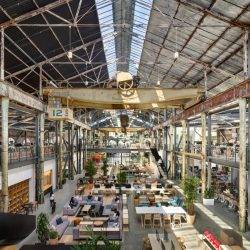 There is a typically telling and intelligent Pixar moment in the film A Bug’s Life in which an already well-lubricated mosquito goes up to a bar and orders a ‘Bloody Mary, O Positive’. The barman plonks a droplet of blood down on the bar. The mosquito sinks his proboscis into it, sucks it down in one go and promptly falls over. The mosquito doesn’t need a glass because that is for animals who have a problem with gravity. For insects, the major force in their lives isn’t gravity, but surface tension.

The cleverness of the illustrators lies in them seeing this from the perspective of an insect. Most of us ignore this kind of thing because our day to day lives are completely dominated by the forces that define not only how we function but the form of our bodies and how we look and behave. Or, as the evolutionary biologist Stephen Jay Gould put it, “we are prisoners of the perceptions of our size”.

The link between form, scale and size is one that defines the natural world. The reason insects don’t grow as large as cows is because then they couldn’t be insects. They are constrained because they have evolved to meet the challenges of the world and the forces that act on them. Surface tension is as great a threat to insects as gravity is to larger animals such as humans.  While a human covered in a film of water merely has to carry a pound of extra weight, a fly would have to carry many times its own weight. Conversely an insect falling from the top of a house won’t suffer at all, while a person would have a big problem once gravity takes hold.

The link between size and function

This fundamental law even applies to much bigger animals. For example, if the gazelle were to evolve into a much larger and heavier creature, its form would change dramatically. If it wanted to maintain its ability to move around quickly, it would need much thicker and shorter legs to support its increased weight. It would become something that looks more like a rhinoceros than a big gazelle. And that is precisely what happened when the common ancestors of gazelles and rhinos went their separate ways.

We can see similar issues arising when it comes to the functioning of businesses. This is perhaps most famously documented in the work of C Nothcote Parkinson, the creator of his eponymous law and also the author of a book which details how an organisation’s size affects its form and function.

A book from the physicist Geoffrey West makes the complex relationship between scale and form evident. In Scale: The Universal Laws of Life and Death in Organisms, Cities and Companies, the author illustrates the point by describing how Godzilla simply couldn’t exist. A 350ft tall monster would simply collapse under its own weight, because an animal’s mass cubes with a doubling of its size.

West makes the same point about cities which scale up in a super-linear way. When a city grows, its wealth, innovation and crime levels grow by a factor of 1.15 per head. West again summons terminology from nature to describe this compound growth, referring to it as ‘social metabolism’.

The scale of the problem for buildings

The Cathedral is not simply a bigger church, but a different thing despite its related purpose

The link between scale, size and form is also, unsurprisingly, evident in the built environment and in workplace design. As Stephen Jay Gould points out, the principle espoused by the biologist J B S Haldane that “comparative anatomy is largely the story of the struggle to increase surface in proportion to volume” can be extended to buildings as well as animals. In an essay, he contrasts the simple floor plan of a small  medieval church in Essex with the vaults, transepts, chapels and windows of Norwich Cathedral from the same period. The Cathedral is not simply a bigger church, but a different thing despite its related purpose.

“Medieval churches present a good testing ground for the effects of size and shape, for they were built in an enormous range of sizes before the invention of steel girders, internal lighting, and air conditioning permitted modern architects to challenge the laws of size”, he writes. “The tiny, twelfth-century parish church of Little Tey, Essex, England, is a broad, simple rectangular building with a semicircular apse. Light reaches the interior through windows in the outer walls. 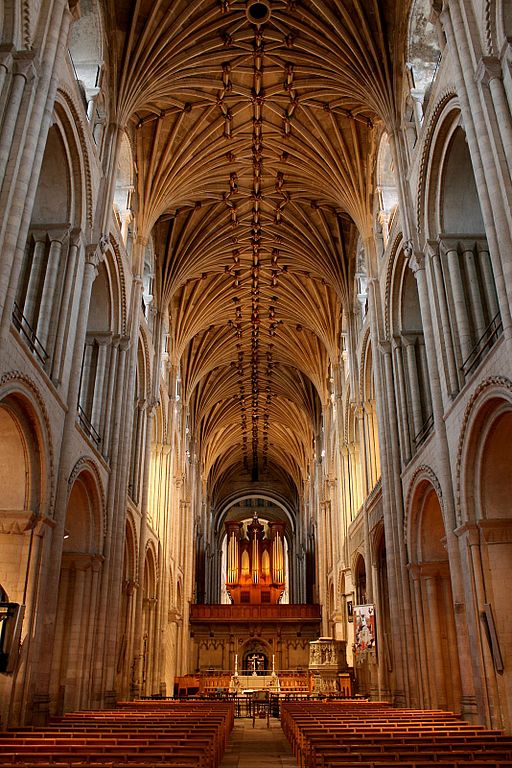 “If we were to build a cathedral simply by enlarging this design, then the periphery of the outer walls and windows would increase as length, while the area that light must reach would increase as length times length. In other words, the size of the windows would increase far more slowly than the area that requires illumination. Candles have limitations; the inside of such a cathedral would have been darker than the deed of Judas. Medieval churches, like tapeworms, lack internal systems and must alter their shape to produce more external surface as they are made larger.

The large cathedral of Norwich, as it appeared in the twelfth century, had a much narrower rectangular nave; chapels have been added to the apse and a transept runs perpendicular to the main axis. All these “adaptations” increase the ratio of external wall and window to internal area. It is often stated that transepts were added to produce the form of a Latin cross. Theological motives may have dictated the position of such “outpouchings,” but the laws of size required their presence. Very few small churches have transepts.

The “invention” of internal organs helped animals retain the highly successful shape of a simple exterior enclosing a large internal volume; and the invention of internal lighting and structural steel has helped modern architects design large buildings with simple exteriors. The limits are expanded, but the laws still operate. No large Gothic church is higher than it is long, no large animal has a sagging middle like a dachshund.”

This is not just a law for dogs and churches. It is something we should consider when we look at workplace design and is yet one more reason to question the idea that there is one ideal form of office towards which all must evolve. Form is linked directly to size and scale and we should not necessarily expect a large office in one sector to ape the forms of a small office in another.