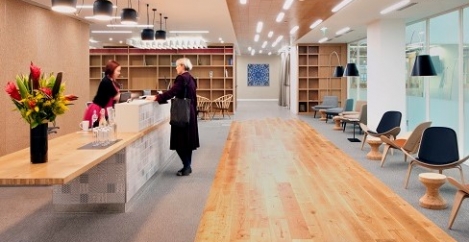 The workplace revolution is already here 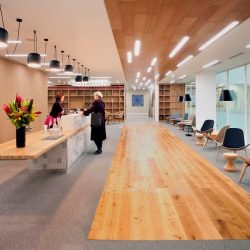 We should all count ourselves privileged to witness first-hand the most dramatic changes in working practices in over two hundred years. This workplace revolution has been brought about mainly by technology which has allowed freedom of movement through Wi-Fi and cloud technology. This freedom has been embraced by the smart companies, allowing their people to thrive by creating workspaces that take advantage of this opportunity to unshackle themselves from fixed desk positions. They have given them great spaces in which to work, to go out and enjoy their environment and to have the ideal place in which to perform each task they are working on throughout their day.

This recent and dramatic change in working environments and working practices which has led to a positive effect on anyone fortunate to work in a company which has taken these improvements on board and implemented them in their workplace.

There is now a new revolution happening right now and while I would say that most companies still cannot see its full extent yet, those that do and those that understand and embrace this change will be the ones best placed to harness its potential. They will be able to hire the best people, they will be able to retain the best members of staff and ultimately, they will be more successful. The revolution is not about technology and it’s not about the workplace. These two areas will of course play an important role because you need to have those in place, but this is far more important and it actually goes against current ideas about future technology and the upcoming and inevitable rise of AI. The new revolution is about people, your people. How you look after them will ultimately affect the success of your organisation.

Before I can explain in more detail I want to take you back to where we have come from – in terms of the changing workplace environment, what is happening now – the revolution has already been happening slowly and some huge organisations are aware and making changes but most companies are not.This is another pivotal moment in time for businesses and those who are ahead will benefit. This change is so important that it covers all industries and all work environments, not just offices.

How the workplace changed

I have seen a huge amount of changes in the workplace, most of it being led by technology. This has been great for both employers and employees and indeed the modern workplace has changed more over the last 20 years than it has the previous two hundred and the rate of change has been incredible. To put this speed of change into perspective, when I started in the industry in 1987, every company still used typewriters and fax machines were in their infancy, with a huge amount of telex machines still in play and I was cool because I had a pager. Mobile phones were just starting out but were very expensive indeed, so were not commonplace.

The changes in the workplace over the last 20 years have been influenced by technology more than anything else with the main driver being versatility. In particular Wi-Fi which has provided convenience and freedom of movement to it’s users. Wi-Fi is no longer new or optional, it’s a necessary staple of any workplace and is here to stay until something better comes along. It is also the main driver that has allowed our industry to design some great new products and create some fantastic workplaces making full use of the freedom it provides, however, technology alone will no longer be sufficient or indeed be the main ingredient in a successful workplace.

By providing freedom of movement and different environments where people can work, for most companies who incorporate agile working you will find that many of your traditional desk spaces become redundant.

Take a look around almost any office and you will see an abundance of empty desks. The reason for this is that there will always be some people on holiday, off ill, in meetings, working from home, having a break or working from somewhere else in the building.

Average occupancy in a normal office is between 50-70 percent. It’s generally closer to 50 percent but people often find that hard to believe. This means even at 70 percent occupancy, in a company of 200 people there are 60 workstations which are not required. Obviously at 50 percent, half the desks are not needed. Don’t believe it? Take a look around the office next time you visit one and you will back this up for me.

Once organisations know their occupancy rates, they can use this information in three ways.

2) Increase the amount of staff who work in the space, meaning they may not have to move offices if they are expanding

3) If they do not currently have different work environments for their staff to benefit from and enjoy working in, they can lose the desks, redesign the space and create these areas without having to move. In turn, this will improve staff retention and also create a more attractive space for anyone looking for somewhere great to work.

The need for care

Successful companies need to nurture, help, understand and most of all care about their people. This is the way forward for any organisation who wants to thrive in the 21st century. What’s also very important is that you genuinely need to care. If you go through the motions and tick all the boxes this is not sufficient. It’s not genuine and you will be found out very quickly.

If on the other hand you implement genuine wellbeing programs – not just fruit on a Monday! If you look closely and work on the culture of the company, so that everyone knows what you are about, if you have a proper employee engagement program where the C suite not only listen but act on the thoughts of their employees, then you will create a loyal team of people, advocates and ambassadors for your company who will work as a team, will push the company forward and will be totally loyal to you because they want to be and they will want to see the company succeed.

The people are the future and that is why I have decided to create company to help organisations not only understand this but to put together successful programs that will help organisations look after their people. Look after your people and they will look after you but your thoughts and considerations need to be genuine, people will know very quickly if the philosophy is genuine or just lip service. You will reap the rewards but only if you care.