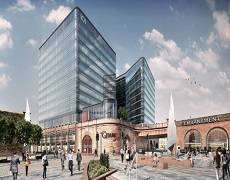 Work is to start on a £56m Grade A office and car park development in Salford’s Greengate Embankment regeneration area. The joint venture partners behind the development are Carillion, Ask Real Estate and Tristan Capital Partners, with Carillion acting as the main contractor. Work on the site, which was part of the former Manchester Exchange railway station, will start in June, with delivery of the 172,640sq ft office and car park planned for spring 2016. Salford City Council has signed an eight-year pre-lease on the whole of the first office building and Q-Park has agreed a 35 year pre-lease for the 442 space car park. The site, which was acquired from Network Rail, also has planning permission for a second phase which comprises another Grade A office building providing 150,000 sq ft of space.

Peter Mather of Tristan Capital Partners, said: “The Embankment development will deliver Grade A space to the Manchester office market and create a corporate centre with Salford at a time when there is little new supply coming on-stream and as the momentum in the U.K. economic recovery lifts tenant demand.”

Greengate takes its name from the main street than ran through the historic core of Salford to the river, where in Medieval times it acted as the main crossing point of the River Irwell to central Manchester.

Salford City Council is driving the regeneration of Greengate Embankment as a residential, retail and business destination. Delivery of Building 101 will complement the City Council’s £13.3M investment in the Greengate public realm, using funding from the Homes and Communities Agency, European Regional Development Fund and the City Council.

The site is located in a prominent location opposite Manchester Cathedral and across the bridge from Manchester’s main leisure and retail hub. The site is also adjacent to Manchester Victoria Station.

Stuart Kirkwood, Director of Development at Network Rail, said; “The redevelopment of the former Exchange station site is an important catalyst for the continued regeneration of the wider Greengate area.  The sale of the site will generate valuable income that will be invested to improve the railway and is set to bring lasting benefits to the local community.”

The project adds to a number of high profile projects in Manchester which Carillion is involved in, including Manchester Airport City No. 1 First Street and One St Peter’s Square.