Are these the world’s most spectacular corporate buildings? 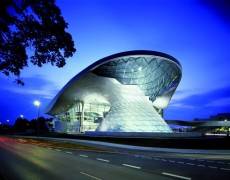 Building data provider Emporis has issued a list of 16 of what it calls the World’s Most Spectacular Corporate Buildings. The list is intended to show how firms use architecture to convey their identity and to impress anybody viewing their supposedly imposing  corporate edifices. The Germany based firm claims the list was compiled by a jury of buildings experts from around the world who considered a range of factors and included buildings from all kinds of industries. Even so, the list is far from subtle with not even an attempt at lip service paid to the esoteric or surprising. It is dominated instead by glamorous blue chip businesses and buildings that are tall, designed by renowned architects or literal reflections of each company’s business.

So the list includes companies such as Malaysian energy firm Petronas and the Bank of China, both of whom went for size to make their point with the Petronas Towers and the bank’s Hong Kong HQ. In the way of these things, both held records of one sort or another for a while. Even the, frankly, hideous Gazprom building in Moscow did enough to sway the jury, presumably by dint of being taller than anything else nearby.

Three of the most literal manifestations of corporate identity on the list are both in Germany, and two are unsurprisingly from BMW. At the car maker’s headquarters in Munich built in time for the 1972 Olympics, the

firm decided to go for a straightforward representation of four cylinders. The more recent addition of the  BMW Welt distribution and conference centre over the road is manifestly more organic but its chromed surfaces are clearly those of a car maker. Even more recently Adidas completed its new headquarters in 2011, also in Bavaria, with the footprint of a large show, promptly named it LACES after the walkways that intersperse the interior and commissioned a small Berlin design firm to create a bespoke office furniture system that it called Workout.

Buildings from star architects are well represented on the list. Richard Rogers’ Lloyds Building is the only British building to make the list.  Inevitably Foster + Partners are included following  the completion of their crescent-shaped skyscraper called The Bow for the Canadian energy company EnCana.

The Encana Bow in Calgary