Arup publishes its vision of the 2050 building 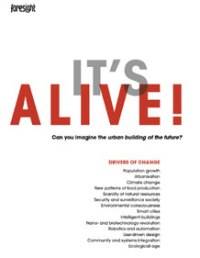 Arup has published a new report called It’s Alive, which aims to describe how buildings in our cities could look and function in 2050. The study has been produced by Arup’s Foresight + Innovation team and predicts that “structures will be fully integrated into the fabric of the city, responsive to changes in the external environment, and designed for continuous adaptability, according to real-time needs and demands of its users.” The report includes a series of artist’s impressions, to illustrate how building features such as photovoltaic surfaces and algae-producing biofuel pods might enable buildings to produce food, energy and resources.

“By 2050, the human population will have reached 9 billion people, with 75 percent of the world’s inhabitants living in cities,” said Josef Hargrave, Consultant at Foresight + Innovation, Arup. “We do not want to predict what the built environment may look like in almost 40 years’ time, but offer insight and inspiration for what could happen. This report explores the idea of intelligent buildings that are able to make informed and calculated decisions based on their surrounding environment—living and breathing structures that are able to support the cities and people of tomorrow.”