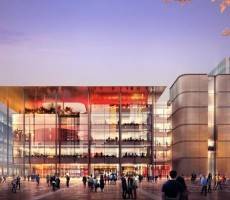 BBC Wales has exchanged contracts with the developer of its new 150,000 sq. ft headquarters in the centre of Cardiff. Although still subject to final planning consent and the approval of BBC executives, the building is an anchor site in the Foster + Partners masterplanned Central Square regeneration project and work is confidently expected to begin in the middle of 2015 for completion in 2017 with full occupancy expected the following year. The new building will be home to some 1,000 staff and has been targeted to achieve a BREEAM excellent rating. Developers Rightacres expect the Central Square mixed use project to provide around 1 million sq. ft of  office, residential and retail space, creating one of Wales’ largest property developments and regeneration schemes in the heart of Cardiff on the site of the current bus station.

Rightacres chief executive, Paul McCarthy, said: “We are delighted that the BBC recognised the potential of this important city centre opportunity and their decision to choose Central Square as their preferred site has generated real momentum for the project. Subject to obtaining planning, we are hopeful the new BBC Wales HQ will be the centrepiece of the development and the planning application will signal another major milestone in delivering the vision for Central Square. As well as creating a vibrant new part of Cardiff, the overall plans will act as an enormous boost to the economy, creating the opportunity for thousands of new jobs and signaling a £500m investment in the local area” 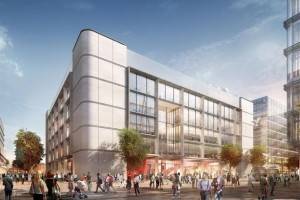 BBC Wales director, Rhodri Talfan Davies, said: “This is another important milestone as we progress our plans to relocate to Central Square. ”Our base at Llandaff has served us well, but the technology there is coming to the end of its useful life and the new centre will open an exciting new chapter for BBC Wales. We are delighted with the progress achieved to date, and we look forward to announcing further details next year.”

Carole-Anne Davies, chief executive of the Design Commission for Wales, said: “We are supportive of the proposals for the new BBC headquarters building at the heart of the city. The approach by Foster + Partners responds to the requirements of the client whilst making a positive contribution to the city as whole, through very high-quality design. The approach aims to allow engagement with the public, contributing to life on the square as well as delivering excellent broadcast facilities.”