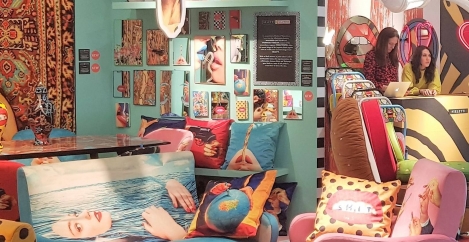 Cold noses and warm design; a review of the Stockholm Furniture Fair 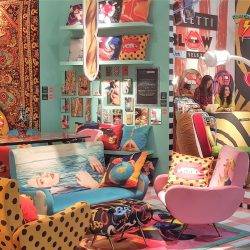 The scene was set when, on the final approach to Stockholm, the Captain announced that the city was ‘enjoying’ heavy snow and a temperature of minus 15 degrees C. Can the fair organisers be persuaded to move future events to balmy June? Probably not. But of course, everything works perfectly despite the weather, and interiors everywhere are beautifully warm.

Stockholm is a fiercely proud and uncompromising place with little in the way of pandering to international tastes. Luckily, the city is easy to navigate with excellent public transport systems – aside from some dubious taxi companies – the people are charming and friendly, and the food is heart-warming and delicious – vegetarians beware.

It’s a sad fact but the word ‘design’ has become one of the most overworked in the English language – as much in the area of commercial interiors as anywhere. Manufacturers of the most poorly conceived products make outrageous claims of design quality, cliché-ing the word to the detriment of the outstanding. 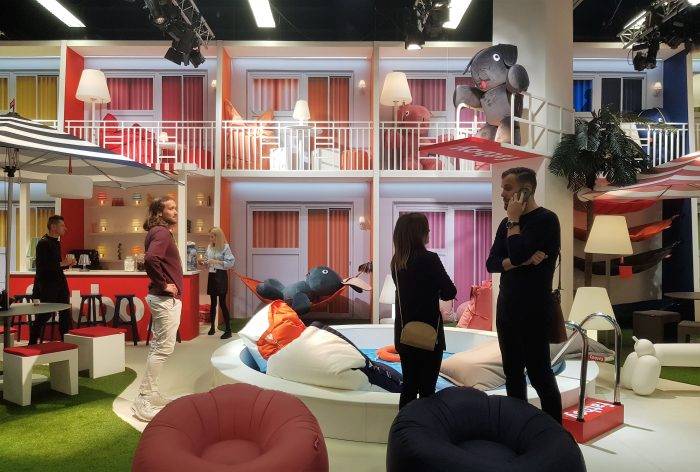 The Stockholm Furniture and Light Fair is part of a 200-event Stockholm Design Week fest where  visitors can immerse themselves in Scandinavian design of the highest quality. There is probably nowhere else in the world better entitled to host such an event, as evidenced by the way particularly in recent years, manufacturers around the world, led by the architects, have adopted, with varied levels of success, their design styles and culture.

Unlike some exhibitions of its type, this show should be “do-able” in a day. It is compact, with only three halls and about 300 exhibitors. However, the sheer quality of so many of the displays and presentations stop visitors in their tracks and makes progress around the show much slower and more rewarding than is true for most exhibitions.

Billed as a furniture and light fair, the exhibits represent many product categories from furniture, furnishings, lighting and accessories for all types of homes, offices, contract and outdoor areas. Strictly speaking, only 55 companies claimed to show office furniture, but nowadays, the blurring of the lines between furniture for the office and the home mean that many more companies’ products than in the past now have commercial relevance.

Some of the most interesting furniture was from surprising areas. Fuhr Home products were designed in Denmark but produced in India. Softrend were from Estonia and showed some beautiful modern upholstery. Other companies, such as Gazzda were from Bosnia and others came from Lithuania, Latvia and Croatia displaying some fine craftsmanship and beautiful and innovative styling. 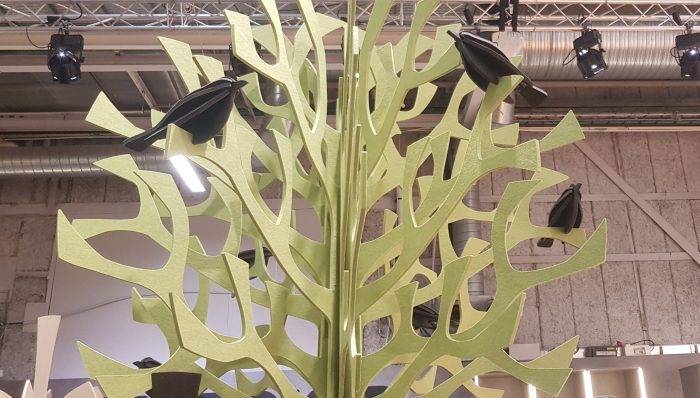 Nowadays, many of the larger European industry groups are Nordic-based and their product portfolios are increasingly influenced by an outward, international, view. This can lead them to sideline the more polarising aspects of their home design cultures. This show demonstrated that the smaller, design-led companies, presenting uncompromisingly Nordic designs that you either love or hate – mostly love – were boldly seizing the initiative from the larger groups with their watered-down aesthetics and focus on the global marketplace.

This is not a show you visit to learn about trends in either working practices or product technology, mechanical or electronic. There were sit-stand tables, hubs, booths and enclosures, but they were not the focus of the show.  The emphasis was on employing traditional craftsmanship and using beautiful materials to create modern working environments. It’s as if the mechanics of the way people work in offices are decided elsewhere, and the role of the makers who show here is to show that new ideas can be realised while embracing attributes such as aesthetics, environmental issues, craftsmanship and the tactile nature of products.

As one would expect, there was a very strong emphasis on natural materials with wood and wool featuring heavily. Although veneers were seen, solid oak, walnut and birch were widely used. Artificial finishes such as lino, laminates and treated MDF were also on display. Colours coordinated earthy shades of greys, browns and greens.

The massive Polish group, Nowy Styl, found space on their stand for their most recent acquisition, Kusch & Co from Hallenberg in Germany.

Kinnarps typified the approach of the larger Scandinavian multi-nationals and the way Nordic design influences have gone global with its range of products focused on wellbeing and productivity.

Another giant, Herman Miller, showcased its new Cosm chair designed by Berlin based Studio 7.5.  The firm has enjoyed decades defining the world’s seating market so it will be interesting to track both the sales of and attitudes toward Cosm.

Grid System, headquartered in Lynge, Denmark, were one of several companies picking up on the fashionable trend of open shelving and storage systems. Grid is injection moulded from nylon and fibreglass and in black or white, uses 40cm cube building blocks to create anything from a simple table, through retail displays to  room size structures, linking buildings’ interiors to the furnishings.

Another open shelving system was shown by Gazzda from Sarajevo, Bosnia. Muse, described as a room divider, designed by Salih Teskeredži?, was beautifully made from solid oak. Artek, a member of the Vitr group of companies, showed another approach to space division.

JotJot’s award-winning 3 seater sofa, Brick, was designed by KiBiSi. The company was one of eight from Lithuania – the common factor being high quality of design and execution.

Poiat from Finland used individually spring-loaded turned solid oak rods to create a range of beautiful open storage units – Bastone. Expormin from Valencia had even brought one of their upholsterers to demonstrate their skills.

Swedese from Vaggeryd in Sweden, founded in 1945 had worked with Khodi Feuiz to create a new a stylish range of seating – Amstelle ,while Brunner showed the new Halm range designed by Jehs + Laub.  Imge 12

Whilst acoustics were not the main theme of the show, there were some varied examples of different approaches to the issues, The Swedish companies included Götessons with their relaxing enclosures – The Hut Lounge and Zilenzio’s fabric wrapped storage units.

The Czech Republic was represented by SilentLab and their MicroOfficeCubiq and Lovi of Finland showed an acoustic tree – complete with acoustic birds. Four Design,  now under the ownership of the British Group, OceeDesign, showed FourLikes  while the impressive Estonian company, Softrend displayed their August Workbay from designer Pent Talvet.

Examples of environmental awareness included FurhrHome, a Danish design firm with family-connected production in India such as this table made from driftwood.

Another company from Finland, Vivero, had worked with designers Ari Kinerva to create the Kaara lecture room unit.  Image 18 while Simon Pengelly had designed Theo for Chorus Furniture with freestanding dividers. Another British entry was Tom Dixon who showed their Fat Chair

Zilio A & C from Udine had worked with Note Design Studio to create their Arkad seating system. Rather more stylish than comfortable.

There were a few wacky displays including Seletti from Italy and the Dutch company, Fatboy with their summer outdoor creation. 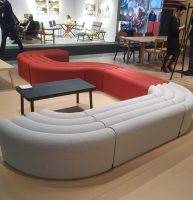 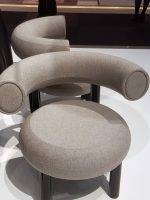 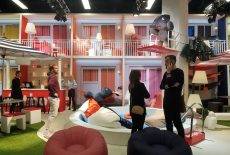 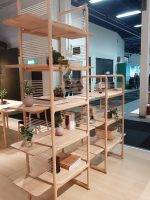 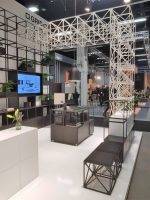 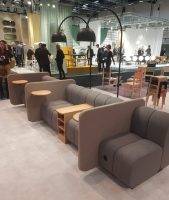 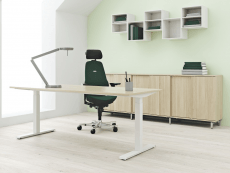 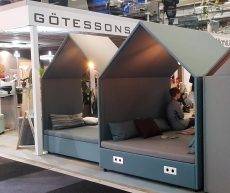 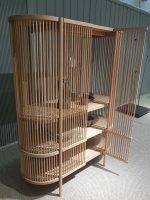 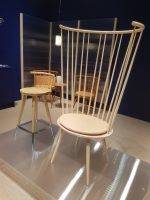 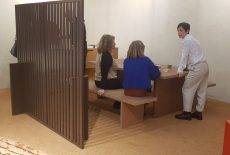 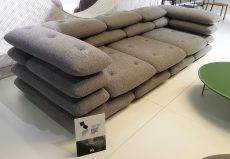