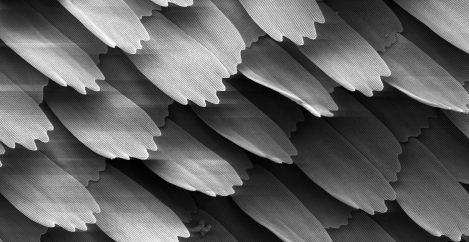 How designers copy nature to create new and extraordinary forms 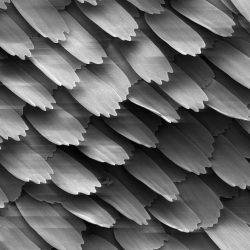 Humans have a long track record of turning to Nature for inspiration. When Leonardo da Vinci turned his mind to the challenge of acquiring the power of flight for mankind, his sketches show he believed the solution lay in mimicking the form and function of bat wings. We’ve learned a lot about aerodynamics since the fifteenth Century but nature continues to provide a blueprint for the way we design materials and structures. Researchers at the University of Alabama have recently won a grant from the US National Science Foundation to explore how the scales on the wings of butterflies (pictured) help the creatures to fly in the hope that it will help engineers design better and more efficient aircraft.

This field of study is known as biomimetics. It is closely related to the idea of biomimicry which is more widely recognised as a term but has been subverted somewhat unfairly to describe the design of materials and objects that look like natural objects.  Biomimetics, on the other hand, more accurately describes the design of things that ape the function of natural forms.

It’s easy to see why this process would appeal to architects designers. These forms have been developed and refined by natural forces over hundreds of millions of years to create perfect solutions to specific challenges. Nature is rarely wasteful and invariably creates forms perfectly aligned to functions. We can only benefit from understanding how these forms came about and what they achieve. It was the architect Frank Lloyd Wright, the creator of Fallingwater (right) who once said: “harmony between human habitation and the natural world through design approaches so sympathetic and well integrated with its site that buildings, furnishings, and surroundings become part of a unified, interrelated composition.”

When it comes to architecture it’s easy to see where the lines are drawn between the twin prevailing definitions of biomimicry and biomimetics. Zaha Hadid’s elegant, dune inspired headquarters building for environmental firm Bee’ah in Sharjah accurately describe the former principle. Whereas Antoni Gaudi’s use of a tree-like canopy of columns to support the internal vault of the Sagrada Familia is an example of the latter. Modern buildings created using the biomimetic principle include The Gherkin, the stable hexagonal skin of which Sir Norman Foster claims was inspired by a similar structure found in certain deep sea sponges which are resistant to the stresses of strong ocean currents and pressure.

One product designer who has become synonymous with the use of natural forms to create products that, in his own words, touch people’s hearts and souls is Ross Lovegrove who has worked with natural forms for many years and who expounded on his inspirational relationship with Nature in this now famous TED Talk.

He doesn’t believe in the ‘blobism and superficial rubbish’ of much modern design. Hence the unmistakably organic characteristics and structures of his Go Chair and the thinking that underpins the latest generation of flooring designs which has moved beyond merely replicating the forms of nature to also drawing on it for inspiration in the way products work. In itself these would create an attractive finish, but their great strength lies in the way they do away with hard lines or distracting colour breaks and instead create organic systems that can be combined in almost limitless ways. They are organic not just in the way it looks but also the way it works and that is the very essence of biomimetic design.