A new report from Oxford Economics suggests although New York, Tokyo, London and LA will stay as the world’s major urban superpowers in the near future, China’s cities’ GDP will double in the coming two decades while Shanghai (pictured) and Beijing have already outstripped Paris in terms of economic activity. The 780 global urban centres covered in the report account for well over half of all worldwide economic activity, are home to a third of the world’s population and will be home to an extra 500 million people by 2035. In just over a decade the combined economic activity of Asian cities will exceed those in Europe and North America. Some smaller European cities will fall out of the top 100 cities worldwide, including several capitals. These are Amsterdam, Brussels, Copenhagen and Vienna as well as Barcelona, Frankfurt and Hamburg.

Asia will be at the forefront of this shift, led by China 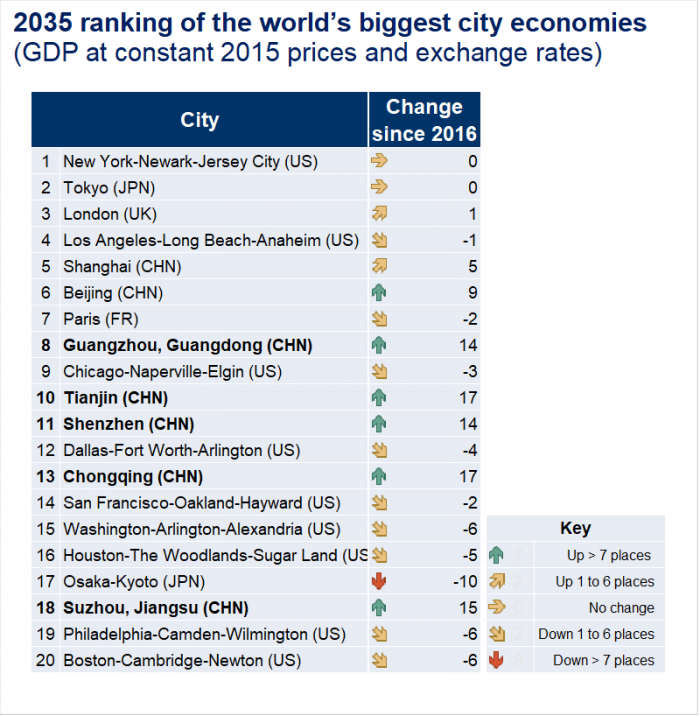 The aggregate GDP of Asian cities will overtake the sum of those located in Europe and North America in just over a decade. To put this into context, just ten years ago the aggregate GDP of European and North American cities was twice the size of Asian centres.
Chinese cities alone will account for almost half of the increase in global city GDP and will represent around a third of total urban GDP by 2035.

By contrast, the combined output of the 58 North American cities covered in the analysis will rise by US$5.3 trillion, followed by non-Chinese Asian cities (US$4.7 trillion) and then European cities (US$3.4 trillion).

Although the report projects a further shift eastwards, it expects the urban superpowers of today to retain their positions as the largest cities in terms of GDP in 2035, led by New York, Tokyo, London and Los Angeles. Shanghai completes the top 5, at the expense of Paris, while Beijing, Guangzhou and Tianjin also take up positions in the top 10.

The more significant changes occur further down the rankings. Indeed, China will move rapidly up the global city GDP league table. Today, there are 18 Chinese cities in the world’s top 100 ranked by absolute size of GDP and by 2035 there will be 15 more, with Dongguan, Jinan and Xian climbing the rankings. Four non-Chinese Asian centres also enter the top 100: Mumbai, Delhi, Bangalore and Kuala Lumpur. 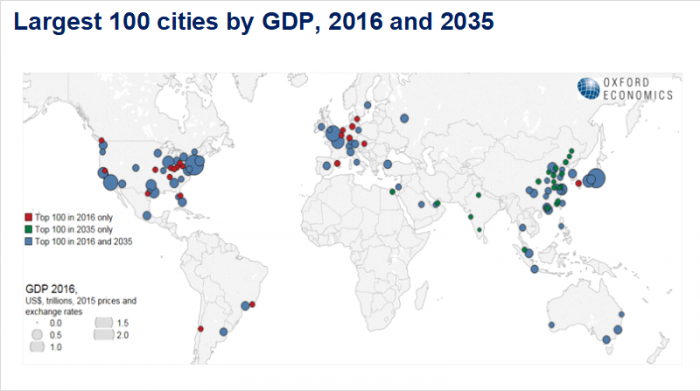 These new entrants come at the expense of a number of urban centres in the West. The number of North American centres in the top 100 will fall by 11 to 27 in 2035, with cities such as Pittsburgh, Indianapolis and Vancouver failing to maintain top 100 status.

In Europe, the report predicts that seven cities will drop out of the top 100, leaving just 14. Those falling out of the top 100 from Europe include capitals cities (Amsterdam, Brussels, Copenhagen and Vienna), as well as Barcelona, Frankfurt and Hamburg.

Whilst Asian cities see their presence in the top 100 rise, the shift in other developing markets is less significant, at least in terms of GDP. Latin America loses two cities from the top 100 – Santiago and Rio de Janeiro.

The report suggests that the number of cities in the top 100 located in the Middle East will rise to four, with Dubai moving up 25 places to 89th. However, the emergence of Middle East cities is an area to watch, particularly if authorities are able to successfully implement some of their ambitious plans for city development. For example, the Saudi Arabian government aims to build a new megacity (named Neom), with the goal of diversifying its economy to focus less on crude oil. 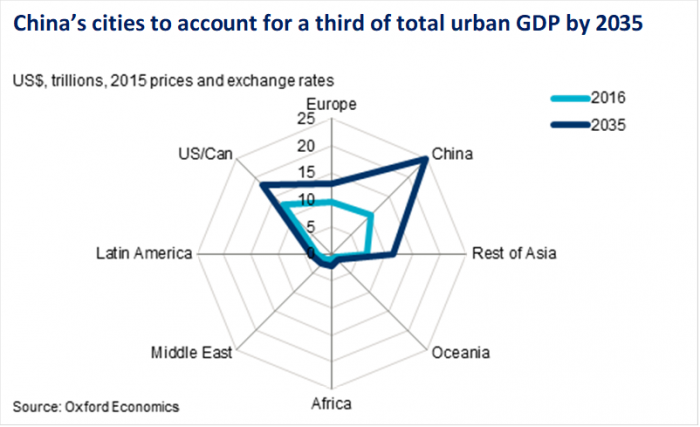 The combination of further global integration and urbanisation does however create challenges for cities at various stages of the development curve.

Rapid population growth in emerging cities requires considerable management to ensure the infrastructure can accommodate the additional people. This includes the provision of adequate housing, support services and transport networks, whilst also developing and maintaining the city as an attractive place to live and work.

For example, in China, authorities are already having to implement policies to alleviate some of the negative externalities associated with the rapid expansion experienced in some of their megacities, including Beijing and Shanghai, such as imposing limits on population and encouraging growth in new satellite cities.

For developed markets, one of the key challenges will be maintaining competitiveness against emerging cities. Over the past decade, we’ve continued to see relocations of jobs and activity from the West to emerging markets where labour is cheaper, typified by growth in manufacturing in Asia at the expense of significant job losses in the US and Europe. However, this phenomenon isn’t limited to industrial sectors, for example Bangalore is trying to position itself as a new Silicon Valley.