Don’t assume your colleagues are making you ill; it might be the office layout 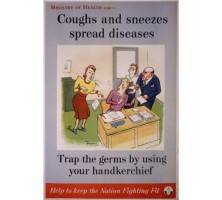 It’s probably tempting to assume that any sniffles and bugs you’ve acquired at work are the direct result of the wheezing, sneezing, coughing and general poor hygiene of your co-workers. You could be right. But a new study suggests that the building and its interior design may well be having more of an influence than you think. The research published in the journal Ergonomics and available to read in full online here, explored the correlation between seven different models of office design and absenteeism in 2,000 subjects. The results published by researchers from Stockholm University in a report called ‘Office Design’s Impact on Sick Leave Rates’ found there was a clear link between how much time people spent off work and the layout of the offices in which they work.

The researchers identified seven categories of office design;  a single-room (cellular) office; shared cellular office with 2 or 3 workers; small open plan offices (up to 9 people); medium-sized, open plan office (10-24 people); large, open-plan office (more than 24 people); flex-office with shared workstations and meeting rooms; and combi-office, a teamworking environment in which fewer than a fifth of staff do not have personal workstations).

The researchers identified those working environments most likely to lead to higher rates of sickness and both short and long term absenteeism.  The report claims that there is a significant risk of short term absenteeism in the various forms of open plan office, especially for female employees. Men, on the other hand, displayed a greater propensity to take days off sick when they work in flex-offices. The researchers main conclusion however was that ‘traditional, open-plan offices are less good for employee health’.

The researchers also concluded that absenteeism is not solely a product of bacteria and viruses, but was also a by-product of the environmental stresses most commonly associated with working in open plan offices especially visual privacy, irrelevant noise and a lack of privacy, although they concede that the type of work commonly associated with open plan as opposed to cellular based environments is also a factor.

Conversely, peer pressure in teamworking environments can encourage presenteeism, so employees come to work when they should really be at home.

The researchers conclude that: ‘Differences in health status between employees in various office types have been found, with the best health among those in flex-offices and [single] offices, and the worst in medium-sized, open-plan offices,” said researchers. “The explanation for the equally good health in the former two – very different – office types could be that they both enable personal control, albeit through different means.

‘The cumulative evidence thus indicates that traditional open-plan offices are less good for employee health. There could be several explanations for this. The risk of infection could be higher among people sharing workspace; the exposure to environmental stressors, such as noise; and less ability for personal control in traditional office open-plan offices. The non-significant tendency for better outcomes on sickness absence in [single] offices and combi-offices could indicate that high personal control and low risks for infection in the former and strong social coherence and peer control in the latter may decrease the risk of absenteeism.’

City of London grants planning permission for ‘Gotham City’ Not just about the money. Higher wages do not improve employee retention