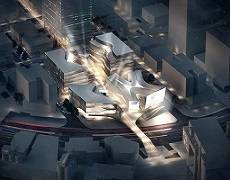 3XN is also designing the DreamCenter

Danish firm 3XN has been chosen by the International Olympic Committee (IOC) as its preferred architectural partner for the design of the new IOC headquarters. It will be located on a 24.000 square metre site on the banks of Lake Geneva to provide an ‘Olympic campus’ of administrative buildings for 500 employees. The IOC announced its intention last year to regroup all its staff, currently spread throughout Lausanne at a number of sites; arguing a new HQ would result in substantial savings in rental fees, increased working efficiency and energy conservation. If the project, which is dependent on discussions and decisions with the relevant Swiss authorities goes ahead, it will add another building to a number of projects by 3XN for big international organizations such as the DreamWorks Animation DreamCenter complex [pictured] and the United Nations.

3XN said its winning concept for the new International Olympic Committee (IOC) Headquarters will be a building that clearly reflects the values of IOC and is to serve as a catalyst for collaboration and interaction for the IOC Staff and Olympic Movement Stakeholders.

Kim Herforth Nielsen, Principal and Creative Director of 3XN, says: ‘This is an incredible honour for our studio. The Olympic Movement has many expressions that are about people coming together in the best possible way. We have designed the new IOC Headquarters as a physical expression of the Olympic Movement and its values expressed through Architecture.’

3XN had been working on the project since last July where 12 international practices including OMA, Amanda Levete and Toyo Ito were chosen to each give their proposal for a new headquarters.

The design will be revealed at a later date as set by the IOC.