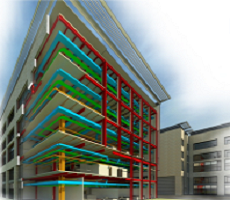 70 per cent of those using Building Information Management believe it has given them a competitive advantage and (at 95%) awareness of BIM is now almost universal. According to the fourth annual NBS National BIM Survey, adoption rates are accelerating with more than half of respondents (54%) using it and 93 per cent predicting adoption by 2016, the Government’s deadline for BIM use on publicly funded projects. Improvements in productivity, increased efficiencies, better coordination of construction information and higher profitability are among the benefits cited by adopters of BIM, with a mere 4 per cent wishing they hadn’t begun the journey. The construction industry feels more confident in its own knowledge of BIM (up from 35% in 2012 to 46% in 2013), there is still scepticism regarding the wealth of information on the subject, with only 27 per cent of respondents saying they “trusted what they hear about BIM”.

However, there is a clear need for greater standardisation with only one-quarter saying that the current levels are adequate; and there is still a widespread belief that the industry is still not clear about what BIM is, the figure of 73 per cent barely a reduction on last year.

More than 1,000 people from across the construction industry including architects, engineers, surveyors and contractors took part in this year’s survey making it the largest independent piece of research into usage of and attitudes to BIM in the UK.

There is a clear divide between the awareness and adoption of BIM between small practices (defined as those with between one and five staff) and larger firms. In all measures, smaller practices are lagging behind their larger counterparts by around two years, with cost still being seen as a major barrier to adoption.

Given the Government’s mandate on BIM for publicly funded work, there is a risk that smaller organisations may be excluded from significant sources of revenue, however the survey does not suggest there is any great resistance to the Government’s BIM strategy with 58 per cent agreeing that the Government ‘is on the right track with BIM’.

The survey also reveals a far more detailed understanding of BIM throughout the industry, with almost three-quarters now being aware of the different levels, up from only half last year.

51 per cent reported having achieved Level 2 BIM on at least one project during the last 12 months, with usage of IFC – a platform neutral, open file format which allows models to be shared among the design team irrespective of software used – and COBie showing marked increases.

It is the latter, which allows the design team to use a Building Information Model to embed and then deliver the information that supports the use and maintenance of a building, which enables perhaps the greatest cost savings for the client.

Commented Richard Waterhouse, Chief Executive, RIBA Enterprises: “What this report clearly shows is an industry in transition from the stage when the early adopters are taking the lead to a position where BIM is becoming the norm.

“In the UK, through BIM, we are at the forefront of a significant change in how buildings are conceived, designed, built and maintained. This change has the potential to bring improved efficiencies and profitability to the construction sector, and better buildings to clients, something current users of BIM have reported in this survey.

“There remain significant challenges and investment of both capital and time are needed. However, there is a wide appreciation of the benefits BIM will bring and the projections of BIM adoption tell us that the UK can be world leaders in this.”

The full NBS National BIM Survey will be released at BIM SHOW LIVE today (23 April 2014) and will be available on theNBS.com from 24 April 2014.

On Green Earth Day, a reminder of how we struggle to understand ‘green’ 3XN chosen as preferred partner to design new Olympic HQ