Edinburgh most attractive city for commercial property investors outside London 0

Edinburgh is the most attractive British location for commercial property investment outside of London, according to new research by law firm and real estate consultancy Morton Fraser. Research amongst investors by the law firm’s commercial real estate division ranks a list of ten British cities outside of London according to their attractiveness as investment options. Edinburgh, Bristol and Manchester are the most appealing regional locations for investors, based on an indexed score of how many more investors found them attractive propositions compared to those who did not. However, the remaining seven cities did not appeal to the majority of investors, with more rating them an unattractive investment proposition rather than an appealing one. Aberdeen is rated the least attractive location for investors, coming after its energy-dependent economy was hit by falling oil prices, leading to thousands of job losses and the contraction of the oil and gas industry. 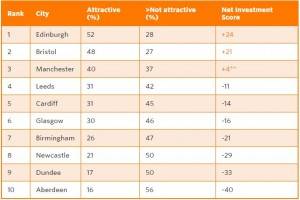 “Regional commercial property investment has a lower upfront capital cost but can often return higher yields and longer tenant leases, improving income security. However, those benefits are outweighed by perceived economic risks in most regional cities by potential investors.”

According to Morton Fraser, Leeds, Cardiff and Glasgow will all expect to move into a net positive investment score in the coming year after at least 30 per cent of investors felt they were attractive locations. They have also negotiated city region deals with the UK Government collectively worth at least £3bn.

David Stewart added: “Demand for equity stakes in commercial property vehicles has increased in recent years as investors seek value and flexibility in the asset class. City region devolution will play a key role in ensuring investors see regional locations as positive income-generating opportunities. That said, experience shows that a good property investment can withstand economic fluctuations and the right opportunities can be found in all these locations.”