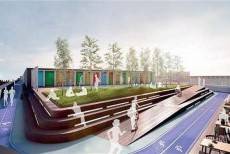 Two landmark developments in London have been given the go ahead at the same time as the troubled plans to develop the iconic Smithfield market are once again put on ice. Google’s plans for a 924,000 sq. ft headquarters building as an anchor of the redevelopment of Kings Cross were waved through by Camden Council, while Islington Council has also granted permission for a 207,000 sq. ft scheme to develop six storeys of office space, with retail units at street level, on the corner of Cowcross Street and Farringdon Road, one of two new office developments located at the new Crossrail station.

Things are not quite so rosy for the nearby Smithfield market scheme. As we reported in July, the project had been green lit following a decidedly chequered history but has been called in for review by Secretary of State for Communities and Local Government Eric Pickles. The public inquiry into the development is unlikely to begin for several months and the subsequent process of assessing the scheme is likely to mean that a final decision won’t be taken for another year. The decision by Pickles is just the latest chapter in the story of a controversial development that has seen objections raised on the basis that a development would destroy the historic character of the site.

There is no such controversy at the other end of Farringdon Road as Google’s plans for a new HQ were passed unanimously by Camden Council. The designs by AHMM were unveiled at the end of June and include over 870,000 sq. ft. of office space in a building that rises to 11 storeys high, as well as 16 retail outlets and a selection of cafes, restaurants and bars. The Google building will be home to some 5,000 employees. Doubtless much of the media coverage of the new building will focus on its more playful features such as running track and swimming pool.