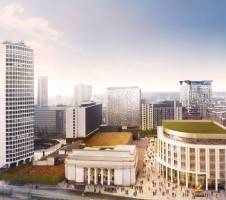 The developer of a major new mixed use project on a 9 acre site in the centre of Birmingham has announced that work will begin soon, after nearly ten years of delays. The £500 million Arena Central scheme was initially announced in 2004, then significantly extended and revised in 2011 to double the amount of commercial property available as part of the development. The first impressions of the finalised plans were published earlier this year and featured open public spaces, an urban meadow, cascading water features, ramps and a pedestrian spine that connects the elements of the site and connects to the main shopping areas in Broad Street and city centre residential areas to the South.  All in all, landscape architect Gillespies has designed four acres of soft landscaping within the development, nearly half of its total footprint. The first office building for the site will be designed by Make Architects. The building, named Arena 1 will be a 144,000 sq. ft. set to complete in 2016.

Money alone isn’t enough to attract and hold on to Gen Y employees What is expense management costing you and your business?