If you are moving to new offices, make sure you can get rid of the old ones first

Building 1000 – seemed like a good idea at the time

One of the most common reasons for large organisations to move to new offices is a consolidation of an extensive and disparate estate that has developed over a long period of time. But what happens when the benefits of the move are scuppered because the organisation finds it impossible to get rid of its old buildings? That is the question facing Newham Borough Council as it emerges that it may have to quit the controversially swanky £110 million offices it moved to in 2010 and back into some of the 26 properties it left at the time and has struggled to unburden itself of since.

Of course any sign that public sector organisations are shopping anywhere but Poundland or doing things that would see private sector organisations garlanded  is viewed with anything from suspicion to downright hostility. So the move to ‘Building 1000’ went down as well as expected. Not only did it become a subject of barroom chatter across the London Borough of Newham, it attracted a fair amount of  unfavourable comment in the media, from within the council itself and met with predictable opprobrium from Government spokespeople who were keen to highlight what they believe is the profligacy of local authorities. 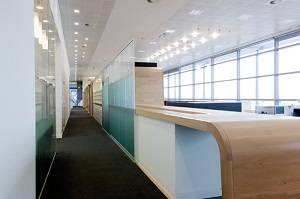 Local Government Minister Bob Neill, who had recently announced funding cuts of over 7 percent to local authorities said: “Such monumental waste is scandalous. Newham’s justification that this vanity makeover was part of an efficiency drive is even more laughable now it emerges they spent nearly two thousand pounds on designer lights. How one of the poorest boroughs in the country managed to spend £111m on their offices is beyond my comprehension.”

Yet there appeared to be method in Newham’s madness. Designed by Sheppard Robson and heralded by a British Council for Offices Award, the move from 26 different locations to just one at Newham Dockside was planned to save the council £12m by March 2011, and £68m over three years. It also was designed to portray the council in a new light and bring its services and employees under one roof. 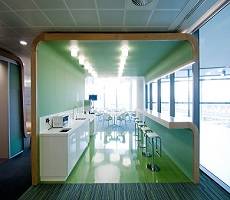 The media had a field day at the time, even managing to trot out that most hoary of public sector purchasing memes – the cost of light fittings. A BBC report following a Freedom of Information request claimed that five particular light fittings at the new building had cost £1853 each.  The actual refurbishment of the building cost around £18.7 million

Now the BBC is reporting – with a special mention for the lights as if they’re the biggest issue here – that the council has been unable to divest its old estate and may have to look for new tenants for Building 1000. Plans are apparently already in place to move some departments back into old buildings and the council apparently remains open to offers for the purpose built offices that were supposed to reduce its costs and bring everybody under one roof.