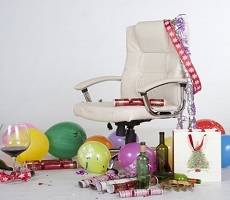 We’re well into the office Christmas party season and with it comes the usual management warnings; however, this one comes from the Institute of Leadership & Management (ILM) so it’s worth taking notice. A survey by ILM reveals some pretty predictable misdemeanours; including almost 9 out of 10 workers (87%) seeing colleagues drink too much and 48 per cent having gone to work with a hangover after their office party, but over a quarter (28%) also admit to having heard staff revealing their colleagues’ secrets. There are consequences of such indiscretion, with more than half the managers surveyed (51%) saying they would reprimand workers for being rude to each other, while 28 per cent would tell workers off for revealing their colleagues’ secrets. And keen to dodge the line of fire themselves; 41 per cent of managers would reprimand staff for shouting at the boss.

However, managers are more relaxed about the morning after the night before, with only 10 per cent of them reprimanding their workers for coming in with a hangover after the Christmas party. The survey also showed that we are a nation of troupers, with just 3 per cent choosing to call in sick rather than weather the storm.

Charles Elvin, Chief Executive of ILM, commented: “Christmas parties are a great way for companies to show their appreciation to staff for all their hard work during the year, and it can also be a good opportunity for managers to get to know their staff in a more informal setting. However it is important for all to remember that they are still, essentially, in a working environment.”

94 per cent of managers hoped their staff would enjoy themselves, and 24 per cent are keen for staff to let their hair down and have a dance. However, 17 per cent would reprimand staff for drinking too much.

Elvin continued: “Fall-out from the festive party can be a worry for managers. It is important that leaders communicate exactly what behaviour will be tolerated and what behaviour will not, and as always, lead by example. You can’t offer a free bar all night then complain when people drink too much.”

Although nearly 30 per cent of workers thought their bad behaviour at a work Christmas party had had a negative impact on their career, only 3 per cent reported ever being rebuked for their festive antics. More than 80 per cent look forward to their office party at least some of the time, showing that it is overall still a positive aspect of the workplace and a nice way to end the year.

Main dos and don’t of the survey are:

Flexible working could boost economy by £90 billion, claims report Government must beef up the way it manages outsourced contracts