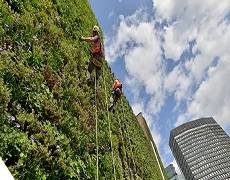 The UK’s largest living wall, designed to reduce urban flooding, has been unveiled in London’s Victoria district. Standing at 350 square metres with over 10,000 ferns, herbaceous plants and 16 tons of soil, the wall, at the Rubens at the Palace Hotel near Buckingham Palace reaches over 21 metres high. The wall’s unique design enables it to capture rainwater from the roof of the building in dedicated storage tanks. Flooding is a key environmental challenge in Victoria during periods of heavy rain, due to the low absorbency of urban surfaces. According to the Environment Agency, there are now around 534,000 properties in London on the Thames floodplain, and one in four in London are at risk of flooding.

The wall is also designed to improve air quality in the area, deaden noise and help to keep the hotel cooler in the summer and warmer in the winter. The vegetation can trap microscopic pollutants known as particulate matter (PM10s), high levels of which have been shown to cause respiratory illnesses.

The wall will be packed with over 20 seasonal plant species including buttercups, crocuses, strawberries, spring bulbs and winter geraniums, chosen to ensure the wall is ‘in-bloom’ all year round, attracting wildlife such as birds, butterflies and bees.

The project was devised following a Green Infrastructure Audit, a mapping process that sought to identify new locations for green space in Victoria that was carried out by the Victoria Business Improvement District (Victoria BID), the body representing over 250 businesses in the Victoria area including the Rubens at the Palace Hotel. As a result of the audit, the hotel commissioned concept designs for the wall in recognition of the environmental benefits the wall will have for Victoria.

Water collected by the tanks is channelled slowly through the wall, nourishing plant life and helping to reduce the risk of surface water flooding in the area by storing up to 10,000 litres at any time. The project has received support from the Mayor of London, Boris Johnson, through his Greening the BIDs programme (co-ordinated by the regeneration agency Cross River Partnership).

The wall was designed by Gary Grant of the Green Roof Consultancy Ltd and installed and maintained by TreeBox Ltd. Armando Raish, managing director of Treebox, said: “Due to the variety of plants used in its construction, we expect the living wall at the Rubens at the Palace to significantly increase the number and variety of bugs and bees in this part of Victoria, helping to promote biodiversity and return nature to this urban environment.

“The wall will also help improve the respiratory health of the people who live and visit Victoria by absorbing pollutants, an important feature of the wall given the mounting evidence that shows just how harmful particulate matter can be to human health.”