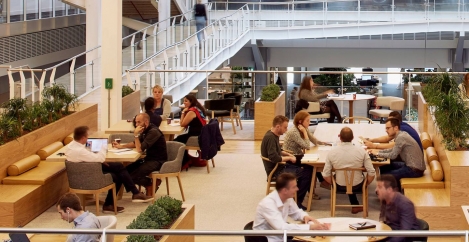 Best workplaces in London honoured by British Council for Offices 0 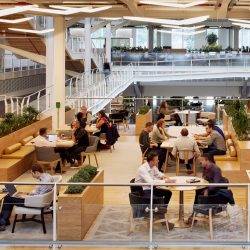 The British Council for Offices has announced the six winners of regional property awards for London and the South East of England. The winning entries, announced at a lunch at the Park Lane Hilton were Sky Central (main image), 8 Finsbury Circus, The Estée Lauder Companies, 20 Eastbourne Terrace, 67-71 Beak Street and Sea Containers House by BDG architecture + design. The prestigious BCO awards programme claims to recognise ‘the highest quality developments and sets the standard for excellence in the regional and national office sector.’ The winner of the Best Commercial Workplace was 8 Finsbury Circus while Sky Central took home the prize in the Best Corporate Workplace Category.

We have followed the development of Sky Central closely and published a full, personal write up of the project authored by Neil Usher, Workplace Director at Sky earlier this year.

The winning workplaces, gallery at bottom of page:

8 Finsbury Circus was praised by the judges as a delightful new office building which maximises the development potential of a very difficult site, whist respecting the surrounding heritage. The judges noted that traditional materials have been cleverly used to create a contemporary piece of architecture that blends effortlessly with its historic neighbours on the circus, which they cited as a mark of an intelligent and carefully considered re-development.

According to the BCO, Sky has created a genuinely unique and hugely dynamic working environment for its team in Sky Central in Isleworth, according to the BCO judges. Housed beneath a spectacular and light enhancing structural timber ceiling, the judges said the large floor plates break down into a series of spaces that are varied, individual and yet unified. They added that despite housing up to 3,400 people, the overarching sense is one of calm, productive collaboration and creativity that is entirely suited to the nature of Sky’s media-led business.

Now housed in Fitzrovia’s One Fitzroy place, the judges highlighted that the fit out of The Estée Lauder Companies building unites over 25 brands whilst retaining their identity in an open and flexible environment designed to attract and retain talent. Set over 10 floors, all the individual brands shine and have their own identity within the business, yet technology also allows key areas to be rebranded at the touch of a button, the judges added. The judges also congratulated the architects at MCM for creating an inspiring workplace ideally suited for the Estee Lauder family and helping the business to innovate and collaborate.

The BCO judges said they were impressed that through a clever refurbishment, Fletcher Priest and Land Securities took a 1960’s building in Paddington with low floor to ceiling heights and produced what looks like a new build office with 20 Eastbourne Terrace. An increase in floor area has arisen, the judges noted, by reorganising the core and staircase as well as through intelligent extensions to the office floorplates which now provide excellent views from the office.

A complex arrangement of existing heritage buildings, 67-71 Beak Street has been creatively and intelligently stitched together to deliver a series of well-lit spaces that retain the character of the existing buildings the judges said. They noted that the development provides a working environment that meets the needs of a modern office occupier, and added that each level is utilised to maximum advantage including the incorporation of a roof terrace that sits well hidden from the view of the streets of Soho.

Once a dilapidated and unloved building, the judges were impressed with the transformation of Sea Containers House into a dynamic and creative workspace for Ogilvy & Mather and their associated businesses. Innovative changes to the structure have created a series of double height spaces that connect the floors, but also take maximum advantage of the dramatic external environment of the Thames which sits immediately adjacent. Flooded with daylight, the judges highlighted how these spaces define the building and have become natural hubs for staff interaction, allowing the creativity of the business to flourish.

Judging Chairman, Nick Searl of Argent, said: “The entrants and winners of this, the inaugural London-only BCO awards, have set a very high benchmark for the region, utilising efficiency, flair and creative design to showcase an extraordinary breadth of talent within the UK’s commercial property sector. The high-quality and variety of workspace on display highlights London’s continued leadership in this fast-evolving sector, responding to the ever more challenging demands of its customers and serving as a gold standard for future occupiers and developers in the capital and beyond.”

Richard Kauntze, Chief Executive of the BCO, commented: “This year’s awards are yet further proof of the quality of new office development in London, a region that continues to be front and centre of innovation in the sector. Awarded for their high-quality construction, striking design or robust flexibility, this year’s London winners showcase the best that the capital has to offer in premium workspace, and continues to strengthen London’s position as the business capital of Europe.”

This is the first year that the BCO has hosted the dedicated London Regional Awards, celebrating excellence in office space regionally, before all winners go on to compete at a national level at the National Awards in October. 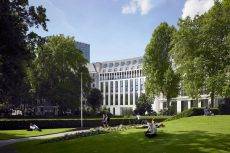 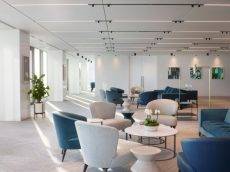 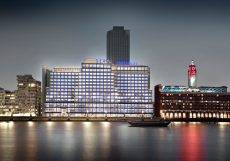 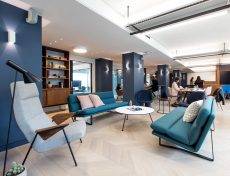