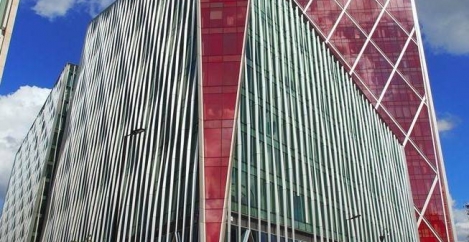 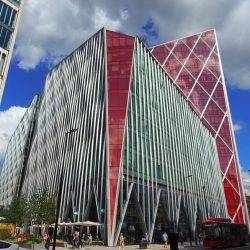 A mixed use scheme featuring two prominent towers next to London’s Victoria station has been named the UK’s worst new building from the last year. The Nova Victoria development, designed by PLP Architecture, was awarded the 2017 Carbuncle Cup – an annual competition organised by architecture website Building Design (BD) that recognises the ugliest buildings completed in the UK over the previous year. The project was named as winner of this year’s unwanted accolade by a panel of judges comprising BD editor Thomas Lane and assistant editor Elizabeth Hopkirk, as well as Twentieth Century Society director Catherine Croft and urbanist David Rudlin who also took into account comments from readers.

The Nova Victoria development comprises two 18-storey office buildings and a residential block. It features a red-coloured facade, which the judges felt was an attempt to “jazz up” the building’s monolithic nature. Other nominees included  Circus West by Simpson Haugh, the first phase of the Battersea Power Station redevelopment which will be home to Apple’s London headquarters.   The project was criticised because its scale means that it ‘obscures the very thing it was supposed to preserve’.

As for the winner, the panel felt that PLP had tried to emulate the angular styles of Frank Gehry and Daniel Libeskind – but had failed in their attempt. Croft described the building, which is the first thing you see upon leaving the underground station, as a “crass assault on the senses” that made her want to “cringe physically”. Rudlin said the development was poor but what set it apart from other shortlisted projects was its red tower. “There’s no variety and you can’t read the floors,” he said. “It’s got the same proportions as Salisbury Cathedral. For me the spire gives it carbuncular status – otherwise it’s just a bad building.”