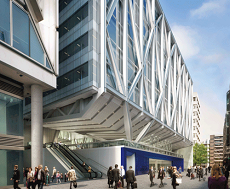 Land Securities has confirmed it has bought the leasehold to the 1.9 acre site located at the western entrance to the Liverpool Street Crossrail station for £16.5 million. Plans for the site, at 21 Moorfields, EC2, which currently comprises vacated 1970s offices and a Transport for London (TfL) worksite, include two new buildings totalling approximately 500,000 sq ft of predominantly office space, with some retail at ground level and a public realm. The two proposed buildings will provide direct access to the underground and the new Moorgate Crossrail station below – due for completion in 2018. Land Securities entered into a conditional agreement to acquire the site in December 2012 and has since negotiated to own the site on two separate 250 year leases, with TfL having the option of participating in the development.

Commenting on the purchase, Colette O’Shea, Managing Director, London Portfolio at Land Securities, said: “This is a site with fantastic potential and superb connectivity, located in the heart of the City, adjacent to Moorgate station and the western entrance to Liverpool Street Crossrail station.”

Graeme Craig, Director of Commercial Development at TfL, said: “This deal with Land Securities is a fantastic example of the work we’re doing to make the most of our assets whilst generating long-term revenue for us to reinvest back into our network. Our partnership will enable the development of office space in the heart of London as well as retail space.”

Employment confidence is increasing, but so is the pay divide finds CIPD Record uptake of London office space continues…but at a price