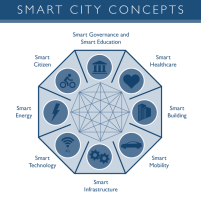 Researchers Frost & Sullivan are promoting a study of the world’s smart cities which predicts that the global market will be valued at US$1.565 trillion by 2020. The report also claims that there will be a minimum of 26 smart cities worldwide  by 2025 with more than half in Europe and North America. By 2025, nearly three fifths of the world’s population, or 4.6 billion people, will live in an urban setting and in developed regions, this figure could run to over 80 percent. This new era of urbanisation will force planners to radically rethink how they create cities, develop digital infrastructure and provide services to residents  in a sustainable manner across a range of key parameters. The report defines smart cities as those built around ‘smart’ and ‘intelligent’ solutions and technology that lead to the adoption of at least 5 of 8 key parameters—energy, building, mobility, healthcare, infrastructure, technology, governance and education, and citizen.

According to Ivan Fernandez, Industry Director for Frost & Sullivan Australia & New Zealand who will be presenting the results of the study at a conference in Sydney in December, the Governments of smart cities are already transforming from a traditional model of a silo-based organisation to a more collaborative, integrated service delivery model. Cities will collaborate with each other to drive smart city innovation by entering into partnerships with each other.

“Technology and ecosystem convergence, collaboration and partnerships between stakeholders from different industries, such as energy and infrastructure, IT, telecoms and government will also expedite the delivery of integrated services,” he states.

The report claims that there are significant opportunities to raise efficiencies in managing cities to make them smart cities. “By 2031, Sydney will have around 1.3 million additional people – that is more than the current population of Adelaide”, claims Hernandez. “By 2030, Sydney ports will handle more than one quarter of the national volume of container freight. Sydney and regional NSW will only have enough waste landfill capacity for another 20 years. 24 percent of the city population take public transport to work but only 20 percent can get to work in less than an hour. The cost of congestion in Sydney is over A$5.2 billion a year.”

The report claims that smart energy is the fastest growing market segment within the smart cities movement and will be driven by the large scale adoption of smart grids and intelligent energy solutions. Smart Energy will make up 24 percent of the total global smart city market in 2025, growing at a compound annual growth rate of 28.7 percent from 2012-2025.

The report also claims that smart buildings will make up 7 percent of the total global smart city market in 2025, growing at a rate of 4.1 percent per annum between 2012-2025.