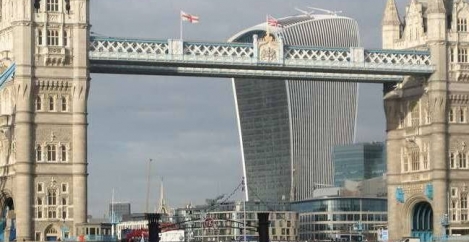 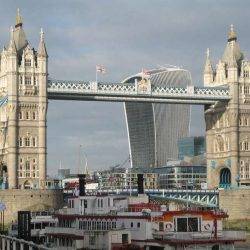 Rents for office space in London skyscrapers are still the highest in Europe, according to a report from Knight Frank, suggesting that the capital remains one of the most sought after business hubs in Europe despite Brexit. Knight Frank has also reported on the costs of office space in East London’s tech hubs and found they are amongst the highest in the world, with rents akin to those seen in the City of London. According to the study, prime rents in London buildings over 30 storeys stood at $110 per square feet over the first half of the year, nearly double the $58 per square feet and $54 per square feet rent for buildings in Paris and Frankfurt respectively.

In spite of Brexit, office space take-up, including across the City of London and Canary Wharf financial districts, has been steady over the past year, prompting overseas groups to invest some of the capital’s best-known skyscrapers including the so-called Cheesegrater and Walkie Talkie (pictured) developments.

“That London still commands the highest skyscraper office rents in Europe, despite the Brexit uncertainty, is a statement of its resilience and popularity as a business location,” Knight Frank Chief Economist James Roberts said. “Firms are willing to pay more to be in London skyscrapers than those in Frankfurt because they view the UK capital as a more important international hub,” he added.

Knight Frank’s report claims that rental growth for Frankfurt and Paris skyscraper offices was flat over the same six month period, indicating that office values in financial cities expected to benefit from Brexit had seen a limited boost so far. Growth in London rents, which are the fifth highest in the world behind cities such as Hong Kong and New York, was also flat over the period.

A separate study from Knight Frank claims that London’s ‘Silicon Roundabout’ is the most expensive tech hub in the world, with rents beating those in similar areas in New York, San Francisco, Dublin and Los Angeles. The average rent per square foot for office space in Shoreditch, the heart of London’s technology district, is £70, compared to around £59 in San Francisco’s Mid-Market area and Docklands in Dublin, where Google, Facebook and Twitter have their headquarters. Renting an office in Shoreditch is now almost twice as expensive as in Brooklyn, where the average rent was around £43 per sq ft.

Locating a business in east London is now almost as expensive as renting office space in the Square Mile, the capital’s main financial district.

Knight Frank’s analysis also found that a number of European cities offer more affordable workspace for tech and creative businesses. In Berlin’s Potzdamer Platz office rents are just £31 per sq ft, while the main tech hub in the centre of Amsterdam offers office space at £26.50 per sq ft.

Majority of workers are optimistic that automation will enhance their work life balance Is the British solution to the ‘sitting disease’ and low productivity to put the kettle on?