Orgatec 2014 focuses on collaboration, quiet and wellbeing in the workplace

Anna King reports from the biennial office furniture and interiors fair Orgatec, which took place recently in Cologne: Collaboration seemed to be king once again at this year’s Orgatec trade fair in Cologne, so much so that you’d be hard pressed to find a conventional workstation amongst the thousands of products on display. Even ergonomic task chairs in the traditional sense were thin on the ground. Senator’s offering was typical in its focus on collaborative work and the provision of work settings. As well as the Ad-Lib Scholar range for educational establishments, it presented the Ad-Lib Work Lounge multipurpose chair, both the work of British design studio PearsonLloyd. This upholstered model complete with headrest is available on glides or castors so it can slot into a multitude of workplace scenarios. Shown in some rich shades such as moss green and turquoise, it comes complete with a fold-down worksurface for brainstorming or other group working. 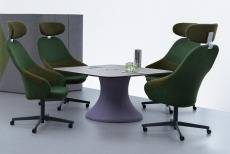 Fellow British firm Bisley meanwhile was showing how the boundaries have been blurred between the home and the office. Its Bisley@Home range, a modular furniture range that is designed for the domestic environment, certainly holds its own when it comes to aesthetics. It ably demonstrated a combination of contemporary cool and Bisley’s signature practicality that was also seen in the Be by Bisley range of storage launched a few years ago.This philosophy has continued with the @Home range: again continuing to push storage to the forefront of the working environment, wherever that may be. 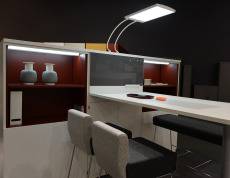 Homeworking too, was in evidence elsewhere. At Vitra, the Allstar chair, as the name suggests, was no shrinking violet in the style stakes. A plastic loop frame provides armrests and a backrest support. The base and the seat come in black with the armrests and backrest available in various bright colour combinations. Designer Konstantic Grcic kept things seemingly simple and open in its design, lest it look too much like a traditional task chair, but it has all the ergonomic trappings you’d expect from this Swiss-owned office furniture heavyweight such as lockable positioning, seat depth and height adjustment and backrest adjustment. 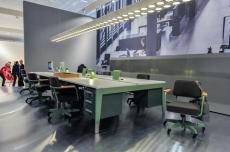 Vitra also turned heads with its Prouve Raw Office Edition. This is the second crossover collection with Dutch fashion label G Star, which revived a product series originally designed by Jean Prouve in the 1940s for the French corporate powerhouses of the time. The collection couldn’t look more 2014 with its industrial feel, edgy shades of green and mix of materials such as leather and fabric. And if proof of the pudding were needed, the collection of workstations, conference tables, chairs and lighting was specified for G Star’s own Rem Koolhaas-designed HQ.

Buzzispace took past designs and gave them a very contemporary spin too. Its Legends collection featured some classics from British designer Ernest Race. The quirky Belgian manufacturer realised there were some nice sustainable synergies between itself and Race such as his re-use of aluminium 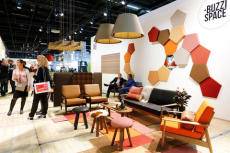 from British fighter planes upholstered with parachute fabric and Buzzispace’s signature material of felt, which is made from recycled plastic bottles. The collection, which includes the BA3 dining chair, the BA table and the charmingly curvy Antelope chair, all share an uncomplicated silhouette and robust materials. The DA armchair, meanwhile, was clearly a forerunner to today’s trend for high-backed furniture, particularly in offices.

Who could have predicted when Vitra launched its Bouroullec brother-designed high-backed Alcove sofa in 2006 that its impact on workplace design would be so great? Indeed, we were still seeing me too products being launched at Orgatec in 2014, each and every one of them claiming to be the future of confidential working.

Addressing the issue of confidentiality in the office environment in a rather more original fashion was USM. Known for its storage, its new Privacy Panel can be deployed to suit the needs of daily office life to create places for private working and conversations, that can be easily reconfigured. Another key trend that became obvious at Orgatec 2014 was the prevalence of the height adjustable sit/standing desk. 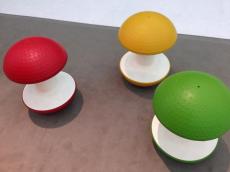 USM for its part launched the first mechanically height adjustable desk, without a gas pressure spring. Humanscale presented the QuickStand, whereby office workers can raise or lower their workstation to vary their posture and work in comfort. Efficient cable management is possible too, thanks to its power cord, DVI cable and two USB cables for all laptop or desktop computer needs.

There were a number of fun solutions for office workers to temporarily sit next to their coworkers without having to use a task chair. One of the best examples of this is Ballo, again from Humanscale. Designed by Don Chadwick, it is a twenty first century version of an exercise ball, promoting short-term, active sitting. It also helps reduce sedentary behaviour and is lightweight enough to carry around, with its integrated hand-holds. It can also be stored easily. 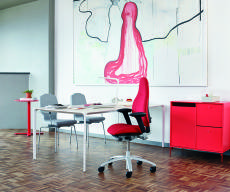 Active sitting is also one of the central tenets of the RH Mereo chair, the latest offering from Scandinavian Business Seating under the RH brand. It is based on the Two Point Principle, promoting active sitting where the user always gets the perfect balance between support and movement. Also part of the Scandinavian Business Seating stable is the HAG SoFi range of chairs. Standing for ‘Stand Out Fit In’ and designed by Norwegian design studios Frost Produkt and Power Design with HAG’s in-house design team, the chair has a combination of balanced movement and a fixed angle between the seat and the backrest. This creates small movements in your ankles, which in turn improves blood circulation through the lower part of the body. The SoFi also ticks the environmental box, having the lowest carbon footprint compared to similar office chairs on the market.

Although Orgatec this year did have a special Sustainability Day, there was not as much of a green product focus as in previous years. However, the European Federation of Office Furniture (FEMB) did bring in an international sustainability certificate into force at this year’s show.

Orgatec 2014 was more about reflecting people’s behaviour in the work environment, the freedom from solo desk-based working into a more effective group-based approach. The furniture launches presented will give people the ability to do that a lot more in the future.

Anna King is a freelance writer and marketing and PR consultant. www.informare.co.uk