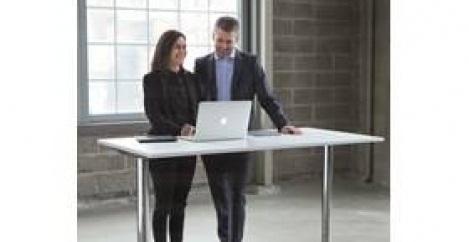 Understanding and overcoming the objections to sit stand workstations 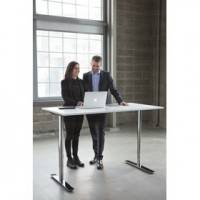 In Sweden, sit-stand working is so commonplace that our Nordic colleagues are perplexed by how slow the UK has been to catch up. The expectation of varying working positions throughout the day is so widespread across Scandinavia that over 80 percent of Swedish, Danish, Finnish and Norwegian office workers already use sit stand workstations, and offering employees a height adjustable work station is now mandatory in Denmark. Despite sit-stand working still being in its infancy in the UK, with only 2 percent of knowledge workers having access to height adjustable workstations, there is plenty of compelling evidence, and a groundswell of expert opinion, to suggest that the UK office is going to have to get off its backside pretty soon.

The huge amount of  recent BBC news coverage and publicity generated by the ‘On Your Feet Britain’ initiative (www.bhf.org.uk/health-at-work/events/on-your-feet-britain) has done a great deal to raise awareness of the health perils risked by the many Brits who spend  8.5 hours a day or more sitting down, and a perusal of research cited on the NHS Choices website tells us that, compared to the shortest time spent sedentary, the longest time spent sitting was associated with a:

When you then factor-in that back problems (also associated with too much time spent chair-bound),  cost UK employers more than 15 million workdays in 2013, excessive sitting down soon adds up to a very expensive problem indeed.  It’s a foolhardy employer who isn’t prepared to embrace change; for the potential cost savings a healthier, more active workforce will give them. (www.ons.gov.uk/ons/rel/lmac/sickness-absence-in-the-labour-market/2014/rpt—sickness-absence-in-the-labour-market.html)

One of the obvious way to fight the perils of  sedentary office life is to introduce sit-stand desks, as they not only help to get workers up on their feet for at least part of the working day, but also help companies to meet their DDA and DSE obligations.  However, there are always going to be people who are change-resistant, so how can you counter the inevitable objections to sit-stand working?

The importance of working actively has been all over the media recently. Sit-stand is the hot topic at the water-cooler and employees are going to start questioning why their bosses aren’t making provision to protect them from the ill-effects of a sedentary lifestyle.  Nobody is suggesting that employees should be on their feet all day, but an easily adjustable workstation gives them the opportunity to follow medical advice and get up on their feet every twenty-minutes or so. The easier the desk is to adjust, the more likely people are to use it actively.

The experts say:  ‘Standing all day isn’t the answer. Sit for no more than 20 minutes at a time, and stand in one position for no more than 8 minutes. You should also take a two-minute moving break at least twice an hour to stretch or walk around.’  Professor Alan Hedge, design and ergonomics at Cornell University.

The untidiness issue is easily avoided by having fixed height privacy screens and adopting a ‘return to seated height’ policy alongside your ‘clear desk’ directive, beside which, for whom and what purpose are you designing your office; the wellbeing and productivity of your people, or the Aesthetics Police?

Objection #3: ‘Easily adjustable desks will be too expensive to buy and run’

Now that the technology has matured in Scandinavia, and is therefore cheaper to manufacture, you can buy fully electronically-adjustable desks in the UK from £400 each.  They are far easier to adjust than the old handle-wound versions and more adaptable to various users and tasks than gas-action counterweighted desks, because you don’t need to pre-set the mechanism for differing weight loads.  With many electronically adjusted sit-stand workstations drawing only 0.3 watts of power on standby, (and ultra-eco versions as low as 0.1 watts), leaving a desk on standby, for every hour of every day,  for a year,  will cost less than 40p, or the price of one first class stamp.

Objection #4: ‘Taller desks won’t be as stable as sit-sit versions, and could be a health and safety risk’

Your sit-stand desks will be safe as houses; as long as you make absolutely sure that your product choice has been fully tested and holds its own compliance certificates, because the top end of the adjustment range can cause issues with stability.  It’s also important to ask for desks with finger-safe mechanisms, particularly where the desk is part of a benching system. Producing a safe sit-stand desk is a complex process, not least because the added instability created by extra height has to be factored in from the very beginning of the design process. Beware of positioning a sit-stand adaptation on a traditional static desk and then citing the parent range’s compliance certificates as proof of stability.

And, yes, I did write this standing up!

Marc Bird is UK Head of Marketing for Swedish office furniture firm Kinnarps. He has been with the company for over 25 years and has seen the UK follow Scandinavia’s pioneering lead on aesthetics, sustainability, ergonomics and workplace wellbeing. He believes the UK will soon catch up with its Northern European cousins when it comes to sit-stand workstations too. www.thetimeisnow.co.uk