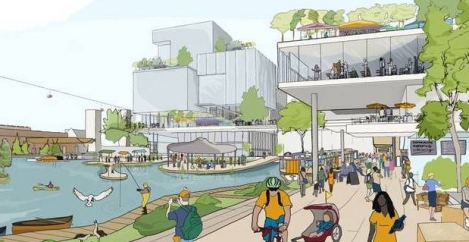 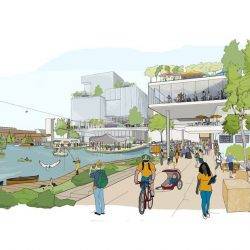 Sidewalk Labs, owned by Google’s parent company, Alphabet, is to build a ‘digital city’ in Toronto to showcase smart city technology and a range of other cutting edge innovations and examples of best practice. The aim is to turn the Eastern waterfront area of the city into a working laboratory for a range of technologies such as fast wi-fi, millions of smart city sensors, sustainable energy and autonomous cars. The over 3 million s. ft. mixed-use development in Toronto will also be built using cutting edge innovations in construction. Google is already set to become the first major tenant in the development with an office for 300 employees of its Canadian HQ. Sidewalk Labs and the local authorities hope to turn the area into a “place for tens of thousands of people to live, work, learn and play – and to create and advance new ideas that improve city life”.

The intention is to develop the area into a space “that encourages innovation around energy, waste, and other environmental challenges to protect the planet; a place that provides a range of transportation options that are more affordable, safe, and convenient than the private car; a place that embraces adaptable buildings and new construction methods to reduce the cost of housing and retail space; a place where public spaces welcome families to enjoy the outdoors day and night, and in all seasons; a place that is enhanced by digital technology and data without giving up the privacy and security that everyone deserves.”

On Tuesday, Sidewalk Labs, a division of Alphabet Inc., and the government agency Waterfront Toronto announced a partnership in which Sidewalk initially will invest $50-million (U.S.) in a year-long planning process for Quayside, a 12-acre district on the waterfront, and the company has signalled its intentions to pursue a much larger area. This is the first such project for Alphabet, and for Sidewalk Labs.

If the initiative proceeds, it would include at least 3.3 million square feet of residential, office and commercial space, including a new headquarters for Google Canada, in a district that would be a test bed for the combination of technology and urbanism.

“Sidewalk Toronto” would represent North America’s largest example of the smart city, an urban district that is built around information technology and uses data – about traffic, noise, air quality and the performance of systems including trash bins and the electrical grid – to guide its operation. Access to those systems and the use of that data, in this private-public partnership, will raise novel policy questions for governments about privacy and governance.