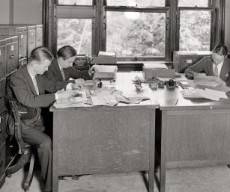 Companies in the Gulf States with poor office design are losing a significant amount of money each year because of an associated loss of productivity and other factors including ergonomics and health and safety. That is according to a new survey carried out by YouGov on behalf of the Index exhibition organisers and office furniture manufacturer HNI. The survey puts the cost of poorly designed workplaces at as much as $70,000 (Dh257,000) per year for a large business and more than $35,000 (Dh128,500) a year for a medium-sized company in the region, according to a new study. A total of 867 senior managers across the Gulf Cooperation Council (GCC) nations including the UAE, Saudi Arabia and Kuwait  were surveyed to establish the leading cause of employee accidents within the workspace, as well as the major causes of occupational health issues.

Three quarters of the panel surveyed (76 per cent) believe that allocating company budget and investing in an upgrade of their office design  would result in a significant reduction in the number of accidents and illness, and ultimately of a reduction in loss of revenue.

“A well-designed office environment not only motivates staff but also helps business thrive. The results emerging from the YouGov survey confirm just how crucial well-considered office design is, and the strong impact that it has on the company’s business and its employees’ health, wellbeing and productivity,” said Rebecca Lockwood, Event Manager – dmg events, the organisers of the Index exhibition.

The senior managers surveyed by YouGov estimated that their companies on average had each lost 14 man days due to employee accidents in the office and a full 39 days due to employee sickness related to occupational health issues over the last 12 months, much of which could be attributed to poor office design.

When asked about health issues developed because of workplace conditions – such as back pain and strain – half (49 per cent) of the total respondents flagged the poor design of the workstation as a major cause and almost as many (44 per cent) named office chairs which are too often old, poorly maintained or broken.