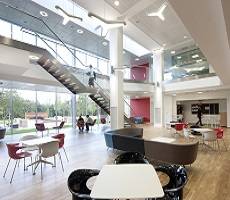 A refurbished building which houses the manufacturer of the hi-tec GoreTex fabric range has been named the best of the best workplace in the British Council of Offices (BCO) annual awards. W. L. Gore’s Edinburgh headquarters was recognised for its transformation from a building which was no longer fit for purpose to a modern, green and inspirational workplace. National winners in the BCO 2013 awards include the Crystal in London for innovation; Birmingham City Council offices for fit out of workplace; Cannon Place in London for refurbished workplace; and Astellas in Chertsey and Nestle Product Technology Centre in York for projects up to 2,000m²

BCO’s annual Awards Programme is intended to provide public recognition for top quality design and functionality and act as a benchmark for excellence in workplaces. According to the judges this year’s best workplace has excelled in its successful delivery of three objectives: to improve the energy performance of the building; to create a welcoming and enjoyable experience for visitors and staff and to develop an open, flexible workspace that would foster openness and collaboration. The building was designed by Michael Laird Architects, engineering by Arup, with M&E engineer KJ Tait, quantity surveyor CBA and construction by Sir Robert McAlpine. 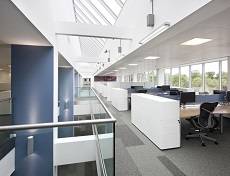 The existing office space was a 1980s ‘add on’ to the production facility; there was natural light on just one side and the building had no heart – which created a central choke point. The new ‘heart’ is centrally located adjacent to the staff canteen, with views over the landscaped gardens and lake below. The cellular office approach has been replaced with an open plan, top lit, working zone that fosters team working and collaboration. What was previously a windowless – and soulless rear elevation of the production facility is now a transparent ‘gem’.

The judges stated: “By engaging with staff at the earliest, and every subsequent project stage, buy-in was achieved, with the workforce acting as willing ambassadors for their new HQ, happy to extol its virtues. The harmony and collaboration that the building has harboured is apparent throughout.”

One of the other standout winners of an award was Birmingham City Council’s offices  designed by squaredot in the Corporate Workplace category. We are big fans of the current wave of workplace innovation in the public sector here at Insight, and this flagship building is no exception. As the BCO judges explained:

“This flagship building which allowed them to rationalise their property portfolio and cut costs. The strong BREEAM and EPC ratings endorse the credentials of this high quality multifunction office. 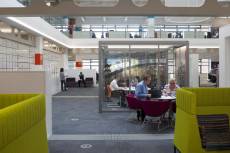 10 Woodcock Street represents the successful culmination of Birmingham City Council’s five year journey to rationalise and restructure its entire back office portfolio under its ‘Working for the Future’ programme. This project sought to transform the way the corporation functions in relation to these challenging economic times and advancing technological conditions. The Council’s achievement of reducing their occupied buildings from 78 to eight is nothing less than astonishing and they should rightly be proud of the success of their policy.

Not only did the team have to rise to the challenge of relocating nearly 3,000 staff to this site by Aston Science Park, they also had to ensure that the cultural shock of moving from ageing, expensive to maintain offices into a purpose built modern building, was handled sympathetically. The overall change process has been a socio-economic success: The council has already achieved significant improvements in staff performance and wellbeing as well as notable cost savings.

The creative design has provided a vibrant, open plan layout which houses 2,200 fixed stations and touch down spaces. This encourages a non-territorial approach in both staff culture and operations. The internal street has been crafted masterfully to open up the building to staff and local residents alike. Walking around it is apparent that the building goes so much further than the basic intention of providing a place of work; the various activities that are underway mean the place is buzzing with life.

For understandable noise and privacy reasons, the working areas have been separated from the internal street but in a way that does not create any barriers – so as to maintain the excellent circulation routes.

Sustainability was also high on the Council’s agenda: The building achieved the BREEAM ‘Excellent’ rating and a strong EPC rating. There is a Combined Heating and Power link and rainwater harvesting whilst the council has found that the brown roofs provide an ideal habitat for local wildlife including the Black Redstart.

Truly a flagship building in every respect 10 Woodcock Street will have a positive impact on the workforce, general public and local residents.”