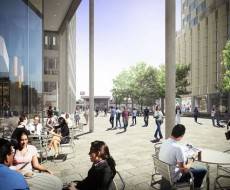 The Royal Institute of Chartered Surveyors (RICS) has announced that it will be relocating its Coventry operational headquarters to a new building in the 37 acre sustainable, mixed-use Friargate development in the city. From 2017, RICS plans to lease 36,000 sq. ft. of space in the second building on the site, adjacent to Coventry railway station. The district will showcase cutting edge low carbon building design and regeneration policies by using local businesses throughout the construction phase to provide improved public transport links, affordable housing and public parks. RICS claims that ‘through a connection to an ultra-efficient combined heat and power generator, Friargate will be at the forefront of sustainable commercial accommodation, reducing both RICS’ carbon footprint and operating costs and offering RICS employees a much better work environment and surrounding area than they currently have.’

The developer of the Friargate district, Coventry’s first purpose-built business development, claims that the development will generate up to 15,000 permanent jobs in the city as well as supporting 7,800 jobs during its construction. The new site will provide some 3,200,000 sq ft of space over 25 buildings, including 14 Grade A office buildings, two hotels, cafes, shops and homes.

Work on the new RICS building is expected to start in 2015 and is planned create an additional 65,000 sq ft of speculative Grade A office accommodation.

Stephen Reynolds from developers Friargate Coventry LLP said: “Friargate has now moved from the drawing board to delivery with the infrastructure works underway and work on the first office building due to commence within months. With its low-energy, low-carbon estate strategy, Friargate is the leading commercial development in the sub-region and is set to become nationally important as the market starts to recognise the locational advantage, by rail and by road. It is wonderful news that RICS has chosen to relocate to Friargate and it affords us the opportunity to deliver much-needed speculative office development into the region.”

Sean Tompkins, chief executive of RICS,  said: “We already have a significant office in Coventry – but to be able to move to such a central location and be part of one of the most ambitious business-district schemes in the country is incredibly exciting. The new building will also represent a continued RICS commitment to a more sustainable future as well as reinforcing our desire to being a responsible employer to the Coventry community. It has been a pleasure to work with such a business friendly, entrepreneurial and proactive council leadership and their ‘can-do’ attitude has been a major attraction for us.

“At RICS we are keen to continue our strong relationship with Coventry and believe our new building will be a fitting destination for surveyors from across the country and indeed the world. It will connect, complement and support our global headquarters on Parliament Square, London.