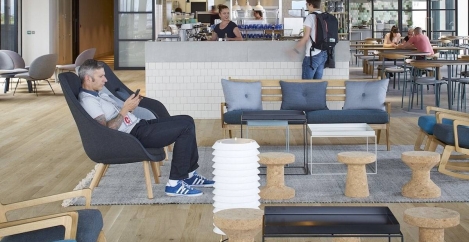 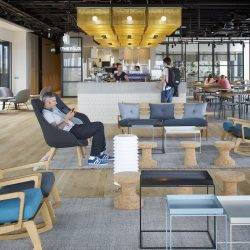 Many of us have ways of framing our ideas about the workplace with reference to the things we love. Because I am a Harry Potter fan that means developing notions of Hogwarts and what it says about how the school building influences teaching and learning practices. J K Rowling’s universe offers rich pickings for this sort of thing and in the case of this feature provides us with an example of how we might consider the current state of thinking about the flexible workspace. One of Rowling’s brilliant ideas is the Room of Requirements.

For the uninitiated, this is a room that presents itself to someone in need in exactly the shape and form required at the time including all furniture and fittings. Most often it appeared at Hogwarts for students in need to hide stuff, but Harry and his friends also used it for their secret society meetings to practice defence against the dark arts, for example.

From an architectural point of view, the idea of the room of requirements has preoccupied architects for ages: how can space be provided in a flexible way, to serve changing needs? In a real world (without magic) this is a considerable problem, because the built environment, well, is built. It’s made for longevity, durability, stability. Walls, once there are not removed easily. All attempts of architecture to provide folding walls, easily movable structures or non-determined structures have proven to be difficult, unusable, impractical, utopic or virtually impossible.

In his brilliant book ‘How Buildings Learn‘, Stewart Brand argues that architecture strives for permanence. Or in his words: “Architecture, we imagine, is permanent. And so our buildings thwart us. Because they discount time, they misuse time. Almost no buildings adapt well. They’re designed not to adapt; also budgeted and financed not to, administered not to, maintained not to, regulated and taxed not to, even remodelled not to. But all buildings (except monuments) adapt anyway, however poorly, because the usages in and around them are changing constantly.”

This age-old problem could be argued to have worsened in the modern business world, where changes seem to happen faster and faster. The discrepancy between the tardiness of physical space and the agility of organisational developments was commented on by Cornell University Professors Franklin Becker and William Sims in their working paper ‘Managing Uncertainty‘ in 2000. They bemoan the “sloth-like-speed of conventional workplace making” and how workplace professionals struggle with “the time-warp rush of organisational change”.

So is flexible workspace impossible, or could we actually engineer a ‘Room of Requirements’ in the real world? This has been the starting point for Google in their quest to turn their workspace into a ‘hackable’ space, i.e. one that is changeable at short notice to suit changing business requirements.

In the context of larger workplace projects on the horizon and the move of much of Google’s building portfolio to the Kings Cross area (6 Pancras Square opened in June 2016), the Google Real Estate team had commissioned AHMM architects to develop a modular unit, called Jack, which would have the full functionality of a meeting room including high-level acoustical privacy, yet which could be built or taken down and reassembled elsewhere in a matter of days. The idea was to have a meeting room that would be moveable in a similar time frame to the constantly evolving and changing business processes and team structures. In fact, the system was conceptualised as a crossover between furniture, accessory system and small room. 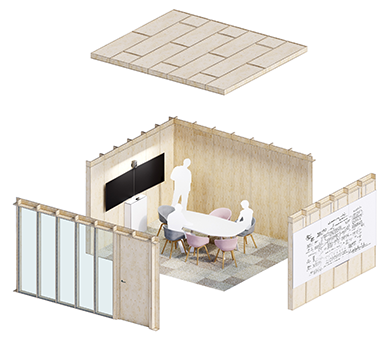 A total of 160 Jack units will be installed in the Google Headquarter in 6 Pancras Square (once fully occupied), in a variety of sizes and configurations, creating open as well as closed spaces for meetings and impromptu conversations.

After bringing the world of workplace the office slide, a plethora of playful interiors including bold and bright colours as well as the idea of healthy and free food on site (all of which are happily copied by other companies), this next workplace revolution seems a more quiet and serious one: providing the spaces and settings people need, perfecting working conditions and allowing the people working at Google to get their jobs done.

The workplace configurations that Jack enables are also of interest from a research perspective for at least three more reasons:

The above mentioned research questions will be addressed by a new EPSRC funded research project called ‘Flexible Spaces, Changing Office Configurations’, which I will run in collaboration with Google until Spring 2017. So watch this space for further updates.

The challenge for the real ‘Room of Requirements’ is on.

If you are interested to learn more about the initial ideas behind Jack, here’s a longer article I have written for Google on ‘Project Jack – Google’s answer to the problem of flexible spaces’ .

Dr Kerstin Sailer is Reader in Social and Spatial Networks and member of the Space Syntax Laboratory at the Bartlett School of Architecture at UCL, and the founder of brainybirdz. She is fascinated by the impact of spatial design on people and social behaviours. An architect by training, her research interests combine complex buildings, workplace environments and space usage with social networks, organisational theory and organisational behaviour. k.sailer@ucl.ac.uk