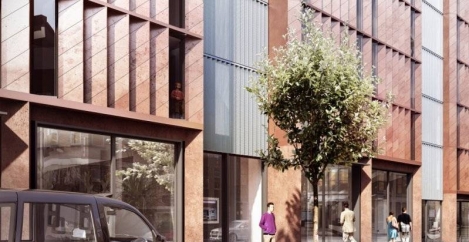 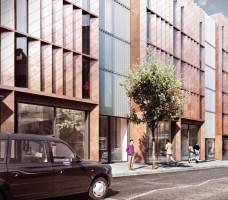 Architects Sheppard Robson have released more details of their design for a major mixed-use project in the Clerkenwell district of London. The site is currently occupied by a multi-story car park and the new scheme, developed alongside Endurance Land will include a 3,900 sq m office development aimed predominantly at SMEs, particularly those in the media, technology and creative industries for which the area is known. The scheme includes a hotel and retail spaces at ground level. Sheppard Robson claims that ‘all elements of the development in-keeping with the vibrancy of Clerkenwell and nearby Exmouth Market, whilst also acknowledging the history of the site which is adjacent to two conservation areas’. The hotel will be operated by Premier Inn, and include a touchdown cafe open to guests and the public.

The office accommodation will be located on the upper floors of the southern end of the site The proposed floor plates will offer well-lit, flexible spaces that could be occupied by a single user or let floor-by-floor. The 10,300 sq. m. project is scheduled for completion in 2018.

Sheppard Robson partner Dan Burr said: “We wanted to replace a car park – which contributed little to the surrounding streetscape – with a building that feels part of Clerkenwell and recognises the area’s reputation as the UK’s design hub. The design takes a number of cues from the rich history of commercial buildings in the vicinity, using this to create a design that is both undeniably modern and rooted within its urban setting.”

Smart buildings, smart cities and the promise of infinite data Majority of employers want to promote mental wellbeing in the workplace