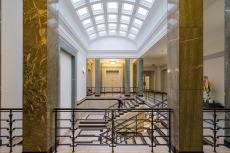 The (rather long) shortlist of nominees for the Prime Minister’s Better Public Building Award 2014 has been announced by the UK Cabinet Office. Hosted as part of The British Construction Industry Awards which aim to ‘recognise all-round excellence in construction, including the overall design, and delivery of buildings and civil engineering projects’ the award’s original nominees were assessed on a range of standards including economic and social value. As well as the rather impressive new headquarters for Wiltshire County Council (above), the Government claims the shortlist includes a college building that is engineered to be one of the quietest buildings in the country as well as a building that will almost entirely be powered by fish oil. Previous winners include Tate Modern and the Velodrome at the Queen Elizabeth Olympic Park. The Government, ever keen to be down with the kids, has produced a Buzzfeed feature on the nominated projects.

The 26 nominees are said to have ‘demonstrated standards set out in the Government Construction Strategy, which commits the government to complete innovative efficient projects and make cost savings for the taxpayer of 15 to 20 percent by the end of this Parliament’. The government claims it is on course to meet this target and has saved taxpayers £840 million from government construction last year alone, compared to a 2009 to 2010 baseline.

Francis Maude, Minister for the Cabinet Office and Paymaster General said: “The buildings shortlisted for the Better Public Building Award are exceptional examples of British construction projects. From the first spade in the ground, these buildings helped set new standards in construction but will also give something valuable back to their communities. As part of our long-term economic plan this government will support the construction industry to ensure these high standards are replicated nationwide so we have the schools, hospitals and other infrastructure Britain needs to compete internationally.”

Medmerry flood defence in Sussex has been announced as the winner of the Award.

Opened in November 2013, the Medmerry flood defence project includes 4 miles of new sea walls to reduce flood risk for hundreds of local properties. The lifesaving defences held firm during last year’s floods and is seen as a gold standard of flood defence in the UK.

The project created a new wetland for local wildlife with 183 hectares of intertidal habitat. Much of the site is now managed by the RSPB as a nature reserve. This new form of defence has helped to save £300,000 taxpayers’ money each year, the cost of repairing the shingle bank. It also supports local economic growth by allowing businesses to operate year round.

Successful employers will shape the future office around the needs of staff Case study: A public sector building that lights the way ahead for others