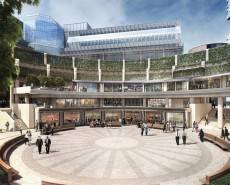 Last year marked a six year high in commercial property investment across the UK according to a new report from property information providers CoStar, driven by increases in regional markets and a sharp upturn of interest in Central London from overseas investors. A total of £52.7 billion of transactions was completed across the UK in 2013, albeit that two-thirds of investments were made in London and the South East of England. It was also a year for record breaking deals, notably the Broadgate office development in the City (above) and More London on the South Bank, each of which were valued at £1.7 billion. London was particularly attractive for Asian investors who CoStar claim see it as a safe haven and invested £9.2bn, up 80.6 percent on 2012.

According to CoStar, Central London offices and regional all-property transactions outside of Greater London each contributed a virtually equal one-third split of 2013’s annual tally, at £17.7bn and £17.6bn respectively, underscoring the huge rebound in investor confidence in investment outside the UK capital.

Mark Stansfield, CoStar senior real estate analyst, said: “The combined factors of a low interest rate environment, easing eurozone instability, the UK’s economic turnaround and the wall of money coming from overseas created a tsunami effect, leading to an annual figure that few would have predicted at the start of the year.”

The 2013 total marks a 56 percent rise on 2012’s £33.7bn and includes a fourth-quarter investment total of £19.5bn – the strongest quarter for UK property investment for more than six years and nearly two and a half times the five-year quarterly average.

According to the report, regional all-property transactions outside London rose by £6.67bn, or 60.8 percent, year-on-year to £17.6bn in 2013, which drove the UK’s six-year high of £52.7bn in annual transaction volumes. Greater London deals – historically the dominant component of the UK transactional market – rose by 38.5 percent year-on-year to £25.8bn reflecting 49.1 percent of the 2013 annual tally.

However, this should not overshadow the enormous strides made in the recovery in sentiment, prices and ultimately transaction levels for the UK’s regional market in 2013, for which investment totals reflect a 61 percent year-on-year rise on 2012’s £10.9bn and are more than double 2008’s £8.5bn when the global financial crisis was at its peak.

Last year’s £52.7bn of UK transactional activity – the highest investment level since 2007’s £56bn – included reaching a six-year quarterly high in the third quarter, at £12.7bn, only for this to be smashed in the subsequent quarter with the eye-watering £19.5bn of verified completed deals.

Annual investment reached a six-year high in all sectors led, as is traditional, by the office sector which accounted for £24.4bn, or just under half of all last year’s deals (47 percent), followed by a 55 percent year-on-year spike in retail investment to £12.5bn and a 52 percent spike in industrial investment to £5.1bn. Last year also saw 97 deals completed above £100m, up from 72 in 2012 and 56 in 2011.

Investment levels in the UK’s regions were individually all up except for Yorkshire and the Humber, for which Norges Bank Investment Management’s acquisition of a 50 percent stake in Meadowhall in October 2012 skewed the previous year’s totals. Last year, the biggest rises were recorded in Wales, East Midlands and North East – with investment more than doubled in each region.

Net capital flows into UK commercial property by overseas investors was £7.5bn, compared to a net disinvestment of £8.0bn by domestic investors. The notable rise was the weight of capital coming from Asian investors – with £9.2bn worth of activity recorded for the year, reflecting an 80.6 percent spike on 2012’s £5.1bn.

The bulk of this capital (61 percent) was invested in the central London office market, with total investment by Asian investors in this market reflecting virtually one-third (32 percent) of the entire market’s investment last year – £5.6bn out of £17.7bn.

In fact, such was the scale of Asian investment’s bet on the UK capital’s office market last year that it almost matched aggregate purchases of traditionally dominant domestic investors, exemplifying the trend of Asian capital seeking to invest in ‘safe haven’ London, commonly considered the  world’s premier global city for liquidity.

The UK’s domestic-domiciled investors were, once again, the market’s dominant investors, contributing £28.8bn of the total purchases over the year, a year-on-year growth of 65.2 percent. North American investors also increased investment in UK commercial property last year – up by 35 percent spike to circa £5.38bn.

Mark Stansfield added: “It was an incredible year for UK real estate investment, especially in the last six months when two six-year quarterly highs were achieved in succession. The combined factors of a low interest rate environment, easing eurozone instability, the UK’s economic turnaround and the wall of money coming from overseas created a tsunami effect, leading to an annual figure just shy of 2007’s debt-fuelled £56bn that few would have predicted at the start of the year.

“Looking ahead, although 10-year government bond yields are expected to creep upwards this year spurred by the Fed’s tapering programme – they have already doubled since May in both US and UK – we do not expect a slowdown in demand for UK real estate. That is partly due to the occupier story, with rising demand across the UK coupled with dwindling Grade A supply creating the conditions for rental growth, but also the huge amounts of foreign capital still seeking a piece of the London pie.  It is rumoured that there is £25bn of capital chasing just £1bn of available property in London, so there is still more wiggle-room for yield compression even as bond yields rise.  In short, 2014 should continue the momentum of H2 2013.”