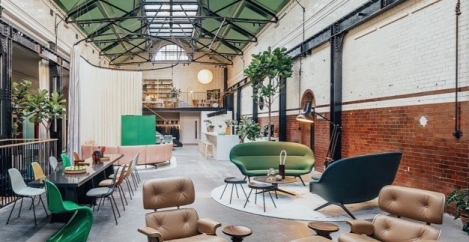 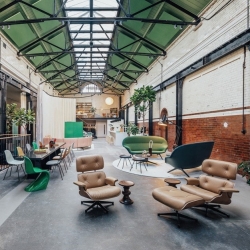 Vitra, the Swiss design company, has opened a new flagship UK showroom at the historical Tramshed building in Shoreditch to coincide with the London Design Festival 2022. Vitra is known for its furniture classics by Charles and Ray Eames, George Nelson, Alexander Girard, Verner Panton and Jean Prouvé as well as for contemporary works by designers such as Ronan and Erwan Bouroullec, Antonio Citterio, Konstantin Grcic, Hella Jongerius, Alberto Meda and Jasper Morrison.

The listed Tramshed building on Rivington Street in Shoreditch was originally built as a power station for the East London Tramway in 1905. Vitra has sensitively renovated the interior, preserving the defining historic features and forging a connection between old and new.

Tramshed opened its doors during LDF with an installation celebrating Vitra’s ongoing collaboration with the family of iconic French designer Jean Prouvé. The installation showcases Vitra’s range of Prouvé furniture and lighting and debuted new additions to Vitra’s Jean Prouvé collection, including a limited edition of the Fauteuil Kangourou, first designed in 1948. The installation also features an original Prouvé Standard Chair made in 1955 for the Commissariat à l’Energie Atomique in Marcoule, Bagnols-sur-Cèze, France. The chair was first acquired by the Vitra Design Museum in Paris in 2000 and was exhibited in London for the first time, during LDF.

Transforming a historic building like Tramshed into a modern showroom proved to be an exciting challenge for the design team, particularly as a renovation project of this scale was a first for Vitra. From the outset, it was decided the design of the showroom should be guided by a respect for the essence of the historic building, so the design sought to conserve as much as possible, celebrating the traces of time instead of hiding them or losing them all together. The ethos has manifested in the natural nuances of the aged cement floor, the old, glazed brick walls, and the prominence of the original black metal beam structure in the new showroom space. 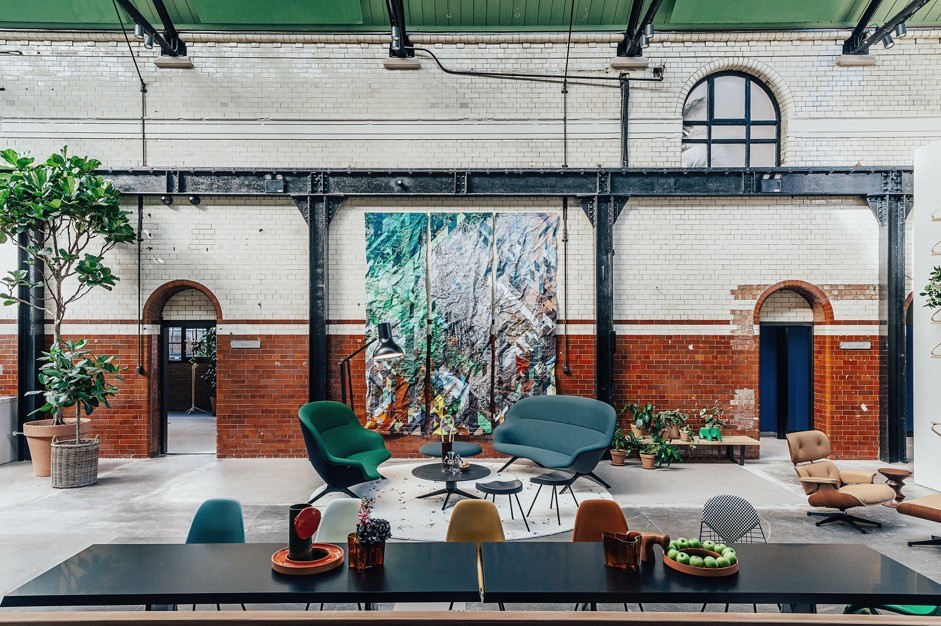 In restoring the building, as far as possible, to its original state, Vitra has removed the remains of the building’s newest iteration, a restaurant. In doing so they have been able to maximise space with a large, bright main hall, clearly structured side rooms and a large gallery space on the ground floor. While it would have been easier to demolish everything and start anew, the Vitra design team sought to cleverly reuse and renovate wherever possible. The result is a novel interplay between the historic building’s existing colours and materials combined with the new elements and furniture by Vitra and Artek. The colour palette chosen also reflects the influences of the past but creates its own accents, while the use of black creates graphic highlights throughout.

The 920 square metre space has been divided into three main areas:

On the ground floor, ‘The Club’ is an office installation geared towards the post-pandemic needs of the people and companies. Vitra implemented and tested the first Club Office at its headquarters in Switzerland. The Club at Tramshed, the home of Vitra’s London team, follows this template with its large bar and varied zones, demonstration how the inspirational concept can be adapted to changing spatial conditions. The ground floor also includes a collage-like display of products from the Vitra Home Collection on the mezzanine.

‘The Gallery’ in the basement of Tramshed contains an inspiring presentation of Vitra’s product portfolio and curated spaces dedicated to various themes. At the opening, the focus was on the comprehensively updated Jean Prouvé collection. The third area ‘The Loft’ is a space to host events and meetings. It is located on the first floor of Tramshed and will open in 2023.

Visitors to Tramshed will also get a sneak peek into the Vitra Session planned for this Autumn.

Getting working culture right is essential to hiring, supporting and retaining workers Working from home is a double-edged sword, according to UK workers